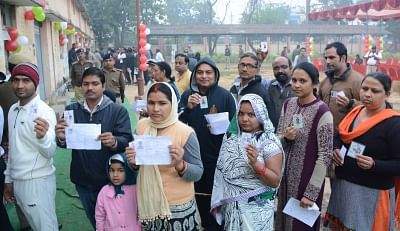 LUCKNOW  | The seven seats in the Uttar Pradesh Legislative Assembly saw a turnout of 53 to 62 percent. In the year 2017, there was 63 90 percent polling in these seven seats. In the by-election, there are about 1263% less votes than in the 2017 elections. For these seven seats, the fate of a total of 88 candidates has been decided by 24.27 million voters in EVMs.

According to Joint Chief Electoral Officer Ramesh Chandra Rai, there is a total of 53.62 percent voting in seven assembly constituencies of the state. 61 50 percent in Amauha’s Naugawan Sadat seat, 52 percent on Bulandshahar Sadar seat, 54 percent in Tundla seat in Firozabad, 50 percent 59 percent in Bangarmau seat of Unnao, 49 percent 42 percent in Ghatampur seat in Kanpur, 51 05 percent in Deoria seat and Malhani seat of Jaunpur saw 56.65 percent polling. The counting of votes will now be held on November 10.

Mockpolls were conducted at all polling stations in the Tundla assembly constituency before starting the polling process. There was no dispute and confrontation during the voting, but the news of the boycott of elections from the morning disturbed the administration.

The voting percentage indicates that voters did not show enthusiasm in the by-election. In many gram panchayats, villagers boycotted voting till noon on the problems. The last year 2017 election in Tundla Assembly was 66.07 percent. This seat was vacant after Prof. SP Singh Baghel became MP in Agra Lok Sabha seat.

ADG Agra Zone Ajay Anand, IG Agra Zone A Satish Ganesh inspected the polling booths and reviewed the situation. Sanitizers, masks and globs were arranged at the polling stations to guard against corona. The turnout was peaceful.

The by-election for the Deoria Sadar Assembly constituency saw a total turnout of 51.05 percent on Tuesday. This is five percent less than the 56. 37 percent voting held in the 2017 assembly elections. In some places EVM malfunctions were reported. The rest of the election was peaceful.

In the Bangaramau assembly constituency of Unnao and at the Buchagada polling station in Fatehpur Chaurasi, some villagers decided not to vote against the non-construction of roads. Villagers said that there is no voting till there is a road.

On receiving this information, along with DM, other officials reached the spot. CDO Rajesh Prajapati along with SO Jitendra Singh reached the village. After this, the people of the village were assured that the road construction will start tomorrow. After which these people agreed to vote.

It is to be known that in the by-elections held on Tuesday, the credit of the Samajwadi Party as well as the BJP, which is in power, is at stake. BJP has six seats out of seven, while SP has one. The BSP and Congress have nothing to lose in this election. While six candidates each of Congress and SP are in the fray, BJP and BSP are beating the seven seats. The SP has submitted the Bulandshahar seat to its ally Rashtriya Lok Dal, while the nomination of the Congress candidate from Tundla reserved seat was rejected.

LUCKNOW| The colleges and universities of Uttar Pradesh will reopen from 23 November. Higher educational institutions closed since 8 months due to the epidemic will open...
Read more
National

New Delhi: The Vishva Hindu Parishad welcomes the announcements made by the Chief Minister of Haryana Sri Manohar Lal Khattar to stop the decades-long...
Read more

Work for India because India is the best

Work for India because India is the best” We have seen in India over the past few decades that there is a rise in population....
Read more