Anti-encroachment campaign will continue in Delhi 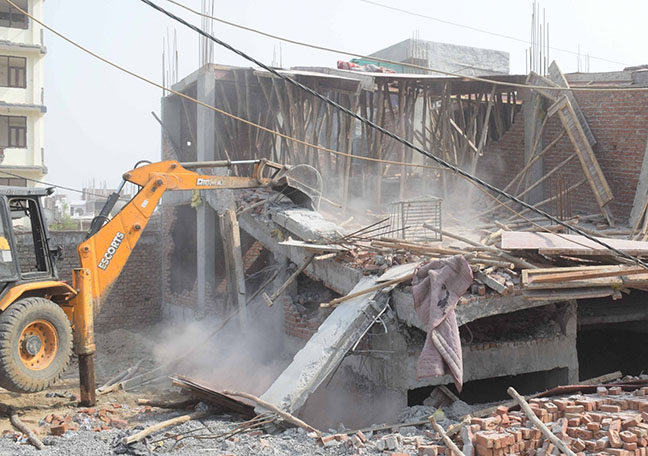 New Delhi | The Municipal Corporation of Delhi (MCD) will also run bulldozers against encroachment in the national capital on Friday. Encroachments (both temporary and permanent) between Karol Bagh, Samaypur Badli Metro Station and Sector 18 Rohini Metro Station are likely to be removed. The administrative officer of Rohini Zone of North Delhi Municipal Corporation has written a letter to the SHO of Samaypur Badli police station requesting to provide 400 policemen, including women policemen, to maintain law and order while removing joint encroachments in the area.

Apart from this, demolition drives can also be carried out in Bawana JJ Colony in Narela.

In a letter to SHO Bawana, a copy of which is also with IANS, the Executive Engineer (Narela Zone) demanded an adequate police force, including women policemen, to carry out demolition or encroachment removal operations without any law and order problems. to run smoothly. The Executive Engineer mentioned in the letter that he has received various complaints regarding encroachment and illegal meat shops in the area.

Protests broke out as soon as South Delhi Municipal Corporation (SDMC) officials reached the Madanpur Khadar area. However, amidst agitation and sloganeering by the local people, the civic body continued its action against the encroachment.

Two five-story under-construction buildings were demolished during the operation.

Later AAP MLA Amanatullah Khan also joined the protesters and within an hour the agitation turned violent and the MLA was taken into custody by the police. After which a large number of people tried to protest against his detention and pelted stones.

Police had to use force to disperse the crowd. Several people were taken into custody amid the uproar.

The situation remained tense in the area for a few hours and then gradually returned to normal. MLA Khan and his 5 supporters were later arrested under sections 186, 332, 353, 147, 148, 149 and 153 of the Indian Penal Code. He is currently in judicial custody.

Facebook
Twitter
Pinterest
WhatsApp
Previous articleNDMC launches a Jan Suvidha Portal as a contactless grievance redressal mechanism for the Residents and service users.
Next articleMundka fire: Many people missing, and bodies are not being identified
Team Janmat Samachar

New Delhi: In the commemoration of Centenary Year of the University of Delhi, Faculty of Law in collaboration with the National Legal Service Authority...
Read more
Delhi

Srinagar | A terrorist was killed in the second encounter in two days between terrorists and security forces in Jammu and Kashmir's Kulgam district on Tuesday. Police...
Read more