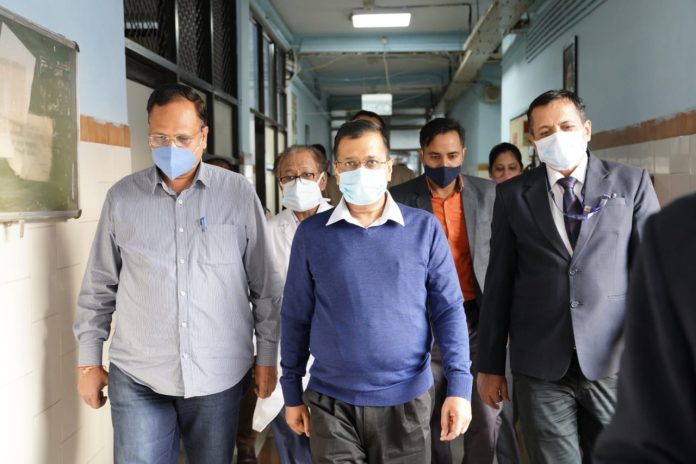 New Delhi:  CM Arvind Kejriwal visited the GTB hospital of the Delhi government, to review the preparedness and facilities in the wake of rising Corona cases in Delhi. He said that in a review meeting held with the doctors and the hospital administration, the doctors have agreed to increase the strength of the ICU beds by 232, which means that the total number of ICU beds in GTB hospital will become 400. Around 663 beds will be increased in other Delhi government hospitals in the next few days. Apart from this, with the Centre assuring 750 additional ICU beds, around 1400 beds will be increased across hospitals in Delhi in the next few days. He said that even with a huge spike in cases today, the doctors and nurses of Delhi are doing a commendable job for the treatment of Corona patients. He was also joined by Delhi Health Minister Shri Satyendar Jain.
Briefing the media after the visit, CM Shri Arvind Kejriwal said, “The Corona cases has been rising in Delhi for the past few days, but overall, there is a sufficient number of beds in the hospitals in Delhi. If we leave some big private hospitals, there are an adequate number of beds available in government and private hospitals. However, there is a dearth of ICU beds in Delhi and we are making efforts to increase ICU beds. I have just convened a meeting with the doctors and the administration of the GTB hospital, the doctors here have agreed to increase 232 ICU beds in the next two days. Health Minister has also convened a meeting with other hospitals, and we will increase around 663 ICU beds in other Delhi government hospitals in the next few days. The Central government has assured us that the DRDO will increase another 750 ICU beds in the Central govt hospitals, which means that we will have 1400 additional ICU beds in the next few days.”
“Firstly, we have to take steps to decrease the number of Corona cases in Delhi, and secondly, we have to provide the best treatment to the Corona patients in Delhi. I agree that Delhi has the maximum number of Corona cases, but if we look at big cities across the world such as Italy, France, New York, Sweden, etc, the videos that surfaced when there were a high number of daily cases in these cities showed people lying on the roads and they were not able to avail beds in the hospitals. At that time, when New York reported 6300 cases in a single day, there were around 550 deaths. Our doctors have done a commendable job,” he added.
CM Shri Arvind Kejriwal said that even with a huge spike in cases today, the doctors are doing a commendable job. He said, “We do not see people lying in the corridors of the hospitals or on the roads, they are getting adequate and timely treatment. I was very touched by the response of the doctors here when they immediately agreed to increase ICU beds for Corona patients. They have 168 ICU beds right now, and they will increase the ICU beds by 232, to a total of 400 ICU beds. This is not an easy task to do in two days. The way our doctors have responded to this calamity is commendable. The doctors have played a better role than Sweden, New York, and many other cities in our COVID management.”
CM Arvind Kejriwal said, “I had sent a proposal to the LG yesterday for decreasing the number of wedding guests in Delhi from 200 to 50, which has been approved by him. Second, due to Diwali, we saw that social distancing norms were not followed in many markets in Delhi. So, we sent a proposal to the LG for the Central government to allow the Delhi government to impose local lockdowns in the market places which are potential COVID hotspots. We are not shutting the markets down right now. I was listening to some news channels yesterday which mentioned that there will be a mini lockdown in Delhi, which is not the case. We will observe the situation in the coming days and will assess according to that. Saving the economy and the livelihood of the people is our topmost priority right now. Unless very necessary, we will not take any step, but we have only written to the central govt for now.”
Advertisement

The Rajasthan government has announced a night curfew in eight districts to curb the growing cases of Covid-19. These eight districts include Jaipur, Jodhpur,...
Read more
Delhi

Samsung Galaxy S21 series can come with ‘Galaxy Buds Beyond’

NEW DELHI | Samsung is reportedly planning to introduce its new Galaxy Galaxy Beyond Wireless earbuds along with the new Galaxy S range phones. It will start...
Read more

we are able to create beautifull and amazing things