Home Top Stories Imran was shot '3 to 4 times in an attempt to murder...
Top StoriesWorld 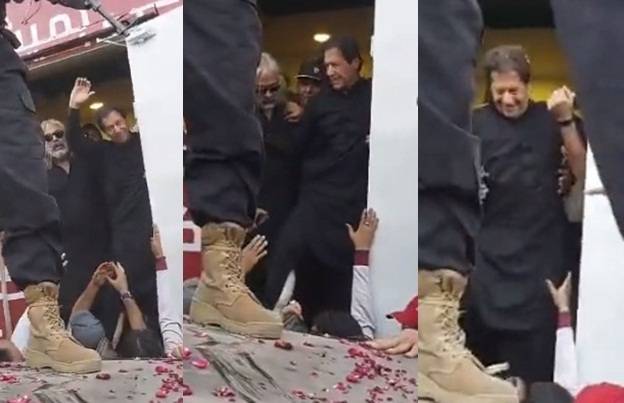 Gujranwala | There was chaos after the party chief Imran Khan was fired upon near the PTI reception camp at Allahwala Chowk in Gujranwala. This information has been given in media reports.

According to Pakistan Tehreek-e-Insaf (PTI) leader Imran Ismail, Khan has been shot in the leg “three to four” times, Dawn reported.

Speaking to Bol TV, Ismail said that he was standing next to Khan when there was heavy firing, in which PTI leader Faisal Javed was also injured.

According to Dawn’s report, he said that the attacker was directly in front of the container and an AK-47 was moving.

According to Geo News, the former prime minister has been shifted to a hospital. Sources told Geo News that four to five PTI leaders were also injured.

According to the police, the suspect who opened fire on Khan has been arrested.

PTI leader Shahbaz Gill said, “Imran Khan is our red line and efforts have been made to cross that red line.”

He also said that Khan will fight till his last breath.

According to the police, the suspect who opened fire on Khan has been arrested.

Khan is leading PTI’s march towards Islamabad, which began on October 29 from Liberty Chowk in Lahore. This is the PTI chief’s second long march this year.

Khan, along with his supporters, may stage a sit-in in Islamabad against the Shehbaz Sharif-led coalition government in late March. PTI is yet to confirm the date of arrival in Islamabad.

According to Khan, the protest march will continue till the election date is announced, The News reported.

Earlier, the plan was to reach Islamabad by November 4. It was later revised to 8-9 November and again on 11 November. PTI leader Fawad Chaudhry had then announced that the party would keep changing the date “till the government is tired”.

Political instability in Pakistan has also fueled economic uncertainty, The News reported, with international rating agencies questioning whether the current government can sustain tough economic policies in the face of political pressure and impending elections.

The Islamabad High Court (IHC) has directed PTI to ensure peace even though the party in Islamabad has been allotted space by the government to hold dharnas and ‘jalsa’.

The remarks came during the hearing of PTI’s plea against the government for not issuing no-objection certificates to the party for holding a sit-in in Islamabad.

Farmers will bring BJP on the road: Akhilesh