NDMC to celebrate “Azadi Ka Amrut Mahotsav”, on the occasion of 75 Years of India’s Independence 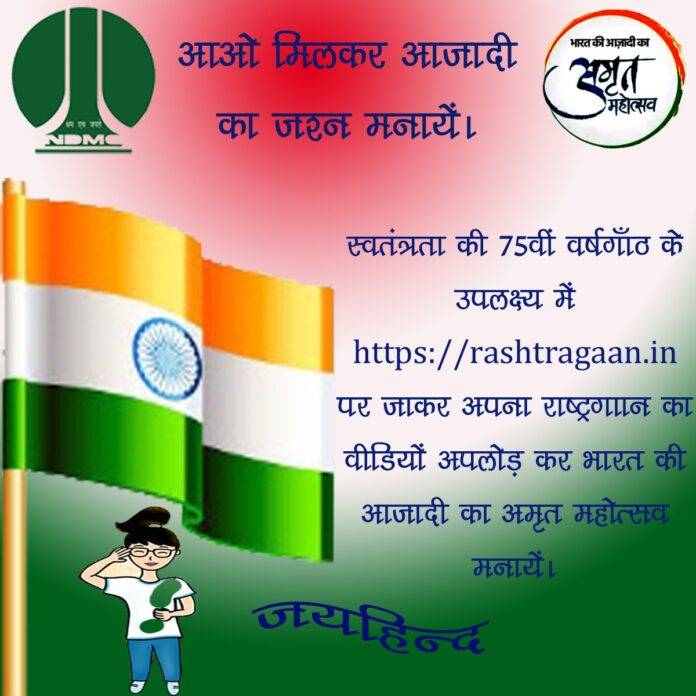 New Delhi: To celebrate the 75th years of India’s Independence as “Azadi ka Amrut Mahotsav”, The New Delhi Municipal Council (NDMC) has launched a unique initiative to create awareness and motivate the residents and visitors of New Delhi area for participation by singing the National Anthem. NDMC has deployed six motivational groups each consisting one boy and one girl at six different prominent locations in NDMC area from 11 August 2021 to 15 August 2021.

Shri Dharmendra informed that the initiative is a part of chain of “Azadi ka Amrut Mahotsav /Celebration of 75th Anniversary of India’s Freedom”, Govt. of India, has launched a weblink namely “rashtragaan.in” to reaffirm citizens’ pride in National Anthem.

He informed that the motivator groups formed are deputed at Central Park, Connaught Place, Janpath, Connaught Place, Palika Kendra, Connaught Place, Khan Market, Sarojini Nagar Market, Dilli Haat. These groups deployed by NDMC would carry a smart phone each who would motivate various visitors to sing and upload the National Anthem in their own device or through smart phone of deputed person.

Under this noble initiative, Citizens will sing National Anthem and upload the video to this link. All such videos will be merged and shown on the occasion of 75th Anniversary of India’s Independence i.e. on 15th August, 2021.

Facebook
Twitter
Pinterest
WhatsApp
Previous articleNDMC has been certified as Water + by the Ministry of Housing and Urban Affairs Government of India
Next articleIndia’s Youth are the drivers of AI–‘AatmaNirbhar Innovation’: Anurag Thakur
Team Janmat Samachar