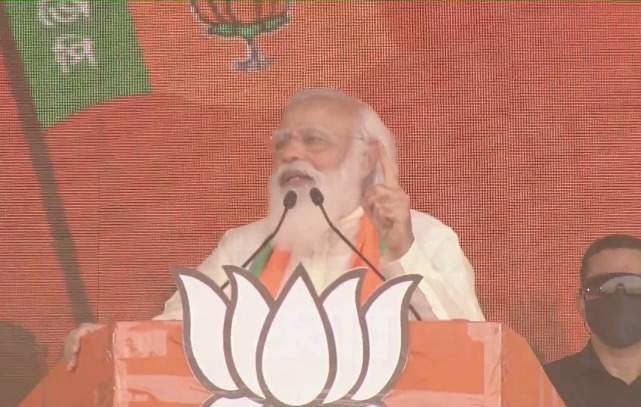 Kolkata| Prime Minister Narendra Modi, while addressing an election public meeting in Purulia, West Bengal on Thursday, raised the issue of the terror attack in Pulwama and the Batla House encounter in Delhi. He criticized Mamata Banerjee’s stand on both the incidents and accused them of appeasement. Prime Minister Narendra Modi attacked Mamata Banerjee and said, “With whom you stood when the Pulwama attack happened, the people of Bengal are not forgotten. A Delhi court has given a big verdict two days ago. The verdict was related to the Batla House encounter. This encounter exposed the face of terrorism and the work that they do for terrorism in India. “

Prime Minister Modi said that in the same encounter, a terrorist bullet killed the country’s brave son Inspector Mohan Chandra Sharma. The court has now sentenced that terrorist to death. People cannot forget the behavior of Mamta Didi and her party at that time. These people were standing with the terrorists at that time. They were questioning the encounter. The extent to which these people can go for appeasement is a great example.

Prime Minister Modi said that just last night, bombing in more than a dozen places in 24 North Parganas has taken place. BJP workers have been targeted. This situation is not right. This revenge violence, this atrocity, this mafia raj will not do anymore. Didi has made the condition of Bengal? There is a crime, criminal, but not in jail. There are mafias, intruders, but roaming freely. There is a syndicate, a scam, but no action.

Prime Minister Modi said, “BJP’s policy of the central government is – DBT – ie ‘Direct Benefit Transfer’. Didi government in West Bengal has maliciousness – TMC- ie ‘Transfer My Commission’. After 10 years of appeasement, lathis on people -After getting the poles, now Mamata didi suddenly seems to be changing. It is not a change of heart, it is a fear of losing. It is the displeasure of the people of Bengal, who are getting Didi to do all this. “