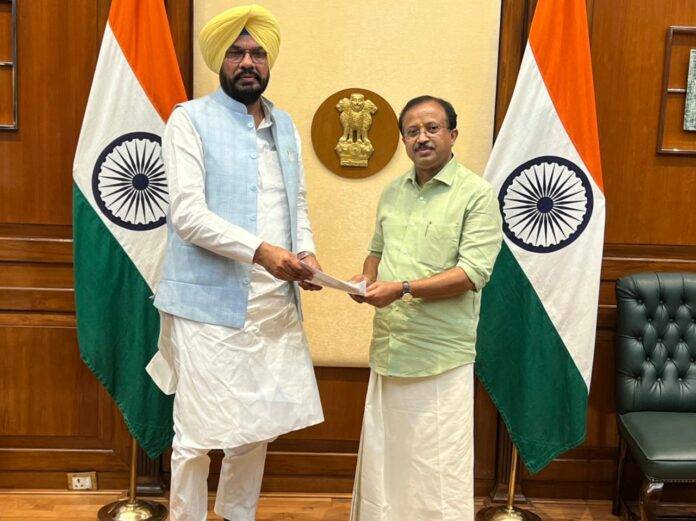 During the meeting, Punjab Cabinet Minister demanded that direct flights to Canada, U.S.A, Australia and England should be started from Amritsar Airport and Chandigarh and Amritsar airports should also be made international airports with all requisite facilities.
Mr. Dhaliwal also demanded that CCTV cameras should be installed at international airports focusing on the immigration counters so that NRI’s should not face any difficulties on these counters. He also said that people are facing difficulties in getting travel visas and attestation of papers and emphasized that there should be a 24/7 helpline for the Punjabi community in cases of emergency.

He also emphasized for Speedy processing of visas of OCIs (Overseas Citizens of India). A single window complaint redressal system is required at the level of the Government of India to address issues related to the community in a time-bound manner. A helpdesk should also be established in the MEA, available 24 hours to enable NRIs to seek help. This helpdesk number should be widely publicised through all the embassies of MEA. He also said that for NRIs returning to India there should be no police verification from the Indian Police. Rather, this verification may be done from the country of origin. For those under political asylum, there may be a special provision in law to come back to their country, added the Minister.

During the meeting, he also said that properties belonging to NRIs are under constant threat of adverse possession. Special relief is requested in the limitation act to avoid the 12-year clause of adverse possession. Bank accounts become inoperative if transactions are not made for a period of one year. NRIs may be permitted to activate the accounts and the one-year clause may be waived, said the minister adding further that there is a condition regarding the maturity benefits of insurance policies for NRIs to open bank accounts in India and this condition should be abolished.
He also appealed Mr. Muraleedharan for a special provision in the Arms Act to enable NRIs to get their arms licenses renewed online. The NRA fraternity is demanding dual citizenship since 1990s but this is still pending for approval .the same may kindly be allowed. OCI cardholders cannot purchase agricultural land in India. Special provision may kindly be enacted for enabling the same. He also said that the extension of voting rights to NRIs as proposed by the union cabinet may be enforced. An online voting facility may be extended to the NRIs.

He said “In times of crisis we need exact data of Indians living abroad to help evacuation. However no data is available readily, it is requested that Indian missions abroad may be asked to keep a city wise database of citizens from India”.

He also apprised the Union Minister about the Instances of fraud in matrimonial suits being reported on a regular basis. To curb this menace It is imperative that law enables the extradition of the culprits. A special enactment to this effect is requested. Indian Consulates within the jurisdiction of one foreign country have different service delivery rules. For instance, Vancouver Consulate General Office requires submission of original passport while Toronto Office does not ask for it. It is requested that there should be uniformity of rules and regulations of Indian Consulates within a country to rule out the possibility of harassment of the NRIs and OCIs

He also said Immigration-related passport and visa issues may be addressed at a single-window available with the government, instead of multiple forums. A special cell may be established to counter the designs of unscrupulous travel agents who smuggle people abroad and then abandon them midway. This exploitation of the citizens requires deterrent punishments for these agents/agencies. Sometimes, in unfortunate events, dead bodies of NRIs have to be brought back to the country. It would be in the interest of our country that such a dead body may be brought back within 24 hours of death at government cost. Formalities may be dealt with later.

Mr. Dhaliwal said that Union Minister gave a positive response towards all these issues and also assured to forward other issues to the other concerned ministries on priority.

Sonia Gandhi gave the mantra of solidarity, determination, and commitment to strengthening the organization in CWC

New Delhi| Congress President Sonia Gandhi has given the party leaders the mantra of solidarity, determination, and commitment to strengthening the organization and speedy revival. Congress...
Read more