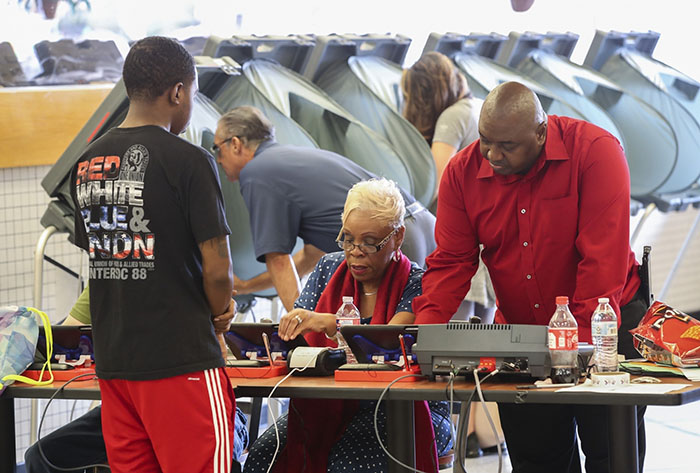 HOUSTON | The early voting numbers for the presidential election to be held in the US state of Texas on November 3 this year have exceeded the total turnout in the 2016 election.

The Texas Tribune reported in the report of Xinhua reported that between October 13 and October 29, 90,09,850 voters have voted, which is 53 percent of the registered voters here. There is one day left for early voting. While there was 89,69,226 turnout from Texas for the 2016 presidential election.

The report said that the total number of ballots that came through election day votes and mail could break the voting record in this time’s election. It is likely that it will surpass the 60 percent voting record for the first time since 1990.

This jump in votes is due to the large turnout of voters in early voting and an increase in voter registrations in urban and suburban counties of Texas.

October 30 is the last day of early voting in Texas. All 122 early polling places in Houston County-based Texas’s largest city of Houston will be open until 7 pm (local time). Local authorities encouraged people to vote with safety measures due to the Kovid-19 epidemic.

Local media quoted Harris County Clerk Chris Hollins as saying, “We know that voting by mail is the safest and convenient way to vote, but we had thousands of Harris County residents who were not eligible to vote for it and Gave more chances. The people of Texas voted in a very safe manner. “

LUCKNOW  | The seven seats in the Uttar Pradesh Legislative Assembly saw a turnout of 53 to 62 percent. In the year 2017, there was 63...
Read more
Politics

BJP president Nadda said – There is a movement of middlemen, not farmers, in Punjab

NEW DELHI | BJP president JP Nadda has called the agitation in Punjab about agrarian laws an intermediary movement. He has stated clearly that this is not...
Read more

CM Kejriwal to inaugurate the Green App on October 29