After the mysterious death of two Dalit girls in Unnao, the village converted into a cantonment 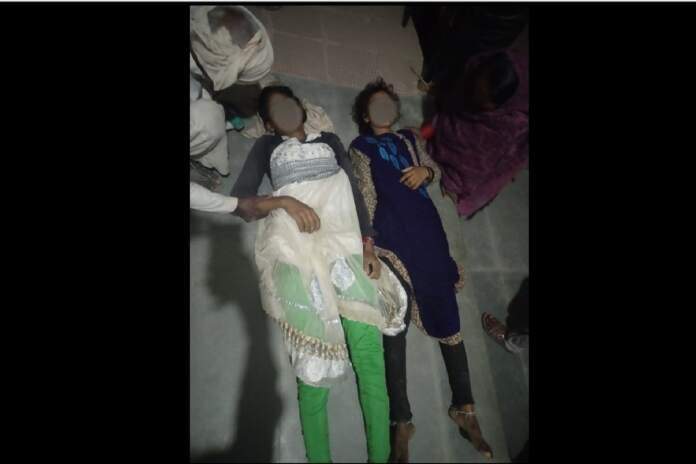 Unnao (UP)| In the Unnao district of Uttar Pradesh, the case of the death of Dalit sisters under suspicious circumstances is catching on. On Thursday, BSP and SP leaders staged a sit-in outside the victim’s house. After this, the village has been converted into a cantonment. The opposition is demanding that the girl be airlifted to Delhi. Barricades have been installed in Baburaha village. Police are stationed on the whim. The media is unable to meet the relatives of the deceased. The villagers have sat on a dharna to protest against the raising of the family by the police.

In view of the security arrangements regarding the incident, CO Hasanganj, CO Bangarmau are also present on the spot. 18 constables, 70 head constables, 30 constables are additionally deployed. ADM, SDM and MLA Anil Singhbhi also reached the village. JCB has been called for burial. Sapai and the villagers started shouting slogans, stopping JCB.

After an all-night investigation and interrogation, the police have found important clues in the incident. Police has started intensive interrogation of the kin of the teenagers. While the police and administrative officials stayed at the scene all night, the DM and SP went to the village and investigated deeply.

The government has taken seriously the incident in Unnao’s Asoha. Police and administrative officials were on alert throughout the night on Wednesday. IG Laxmi Singh, who reached the spot at night, and then ADG Zone SN Sabat approached the police station after investigating and questioning. Later in the night, both the officers along with DM Ravindra Kumar and SP Anand Kulkarni reached the village. The family and villagers were questioned overnight. After the ADG zone and the IG range moved to Lucknow, the SP reached the spot again at around 6 am on Thursday. He along with the team is inspecting the scene. The police team is also taking care of the crop due to the wheat crop standing in the fields so that it does not go bad and evidence is found. The condition of the injured teenager still remains critical. If sources are to be believed, the police officers have found many important clues in the incident, although the authorities are still shying away from speaking anything.

The SP said that investigation into the incident is still in the initial stage. After the post-mortem of the deceased adolescent girls, the report will clearly explain the situation. Six teams have been formed to investigate the incident. Apart from this, SOG and Crime Branch have also been set up.

A panel of three doctors has been constituted in the district hospital for post mortem of both the deceased girls. The panel consists of a woman doctor, a medical officer in charge of Shuklaganj and a doctor from the district hospital. During this time, heavy force is deployed from the main gate of the post mortem house to outside. No one is allowed inside. CO Bighapur Pashankar and Sadar Kotwali in-charge of Dinesh Chandra Mishra are present outside. Ambulances have also been prepared at the main gate to carry the bodies after the post-mortem.

Unnao SP Anand Kulkarni said that 6 police teams have been formed to investigate the incident. Apart from this, SWAT and surveillance teams are also working. The statements and post-mortem reports of the serious teenager are important for the revelations. Both are awaited. The curtain will soon rise from the incident, although the first case seems to be death by poison.

The incident in the Unnao district of Uttar Pradesh has once again embarrassed everyone. On Wednesday night, three minor Dalit girls were found tied in a dupatta in Baburaha village of the district. Two of these girls were killed, while the third is fighting for life and death in the hospital.