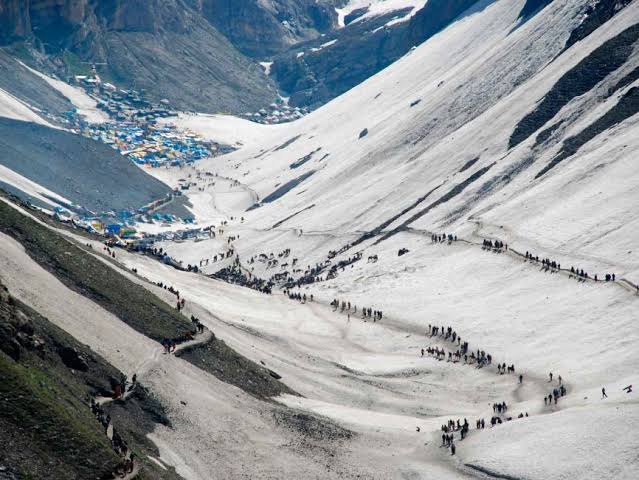 The Shri Amarnathji Shrine Board (SASB) said on Tuesday said that this year’s Amarnath Yatra has been cancelled due to conditions created by coronavirus.

The decision was taken at a meeting of the board to discuss the conduct of the Yatra 2020. The meeting was presided by Lieutenant Governor Girish Chandra Murmu, who is also the chairman of SASB. Shri Amarnathji Shrine Board on Tuesday said the virtual darshan of one of the holiest Hindu pilgrimages devoted to lord Shiva will continue to be telecast live during the morning and evening prayers, which will continue at the shrine, located at a height of 13,000 feet from the sea level.

According to the old plan, it was decided that the yatra would take place from one route only and all the pilgrims will have to go through a COVID-19 test. It was said that the temple authorities would telecast puja on television for devotees across the country. The traditional rituals shall be carried out as per past practice. Also, the Chhadi Mubarak shall be facilitated by the Government.

According to the release, the Board was informed that the arrangements were on track since February 2020, but due to nationwide lockdown and pandemic, State Executive Committee, J&K has continued to keep religious places and places of worship closed for the public. These prohibitions will continue till 31st July.

The health concerns are so serious that the strain on the health system, along with the diversion in resources to the Yatra, will be immense. This would also unnecessarily put the Yatris at risk. The Centre in May had allowed the opening of religious places, but with restrictions, under what it called Unlock2. However, several states decided otherwise amid rising coronavirus cases. The Jammu and Kashmir government this month extended the lockdown till July 31.

The Board further deliberated the considered views of the government. The government made reasoned observations supported by facts which suggested that it would not be advisable to conduct Shri Amarnathji Yatra 2020 and it would be advisable to cancel it this year in larger public interest.