Chennai Test: India’s 317-run victory over England with a claw of alphabets 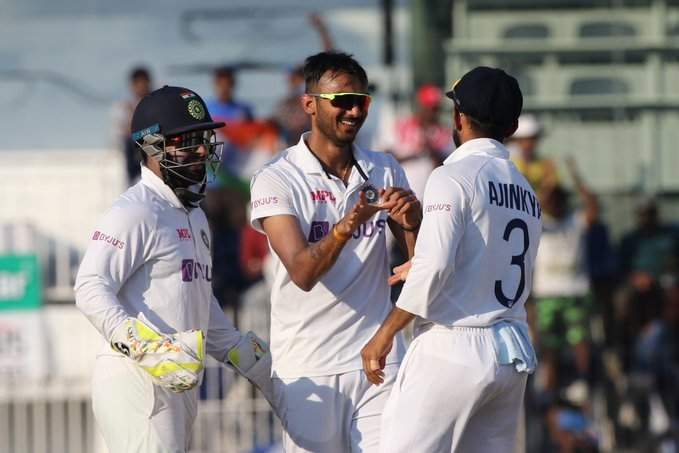 Chennai | With the superb bowling of left-arm spinner Akshar Patel (5/60) and off-spinner Ravichandran Ashwin (3/53), India registered a big win by beating England by 317 runs on the fourth day of the second Test match played at the MA Chidambaram Stadium here. Of. With this, the four-match Test series has become 1-1. India gave England a target of 482 runs, in response to which England was all out after scoring 164 runs. For India, apart from Akshar and Ashwin, Chinaman bowler Kuldeep Yadav took two wickets for 25 runs. England defeated India by 227 runs in the first Test match played on the same ground, but Team India won the second match and equalized with the English team.

England scored 116 for seven wickets till lunch break. After lunch, Joe Root started to play by 33 runs. But at the beginning of the second season, Akshar got caught by Ajikya Rahane and dismissed Root, and broke England’s last hope.

In the end, Moin Ali made some big shots while batting and tried to reduce the margin of defeat. But Kuldeep took England’s last wicket with stumps and won the team. Moin scored the highest 43 runs off 18 balls with three fours and five sixes. Stuart Broad remained unbeaten on five runs with the help of a four off 10 balls.

Earlier, England started to play on Tuesday morning by 53 runs for three wickets. For the English team, Daniel Lawrence 19, and captain Joe Root extended his innings by two runs.

Ashwin stumps Lawrence at the start of the first season at the hands of wicketkeeper Rishabh Pant. Lawrence scored 26 runs off 53 balls with the help of two fours and a six. Root tried to handle England’s wobbly innings with Ben Stokes and both batsmen added 24 runs for the fifth wicket.

Once again Ashwin showed his spin and gave England a fifth blow by catching Stokes at the hands of Virat Kohli. Stokes scored eight runs off 51 balls. After this, Olli Pope, who landed at the crease as a new batsman, was caught by Akshar and sent to the pavilion by Ishant Sharma. Pope hit a four in 12 runs off 20 balls.

Kuldeep then caught wicketkeeper-batsman Ben Fox in the hands of Akshar just before the lunch break. Fox played two balls and scored two runs. England had earlier lost the wickets of Rory Burns (25), Dominic Sibley (3), and Jack Leach (0) by the end of the third day’s play.

The third match of the series between India and England will be played from February 24 at the Sardar Patel Stadium in Ahmedabad.

Look at India, how dirty, the air there is so dirty: Trump