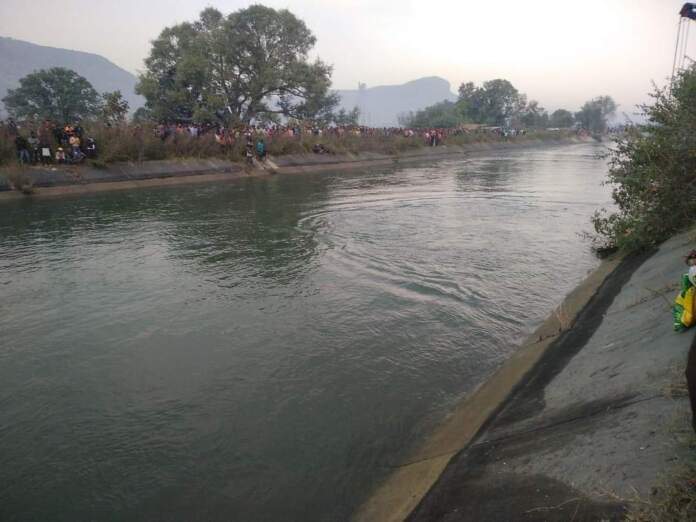 Sidhi (MP)| In Madhya Pradesh’s Sidhi district, a bus full of passengers fell uncontrollably into the canal and got buried in deep water, so far the bodies of 30 people who have been victims of this accident have been removed. Relief and rescue work is in progress. It is reported that there were about 52 passengers in the bus going from Sidhi to Satna when the bus went into the Rampur police station area at about seven and a half hours on Tuesday morning after being uncontrolled in the canal of Bansagar Dam. The bus was completely submerged in water due to too much water in the canal. Seven passengers were safely evacuated. At the same time, the water level decreased after stopping the water coming from Bansagar, then the relief and rescue team members could reach the bus.

State Water Resources Minister Tulsiram Silavat has told that relief and rescue work is going on. The bodies of 30 people have been recovered so far. On the instructions of the Chief Minister, Silavat and Minister of State Ramkhilavan Patel have left for the spot.

BJP MLA Sharadendu Tiwari, who is present on the occasion, has told that the main canal that comes out of Bansagar Dam. This canal contains about 30 feet of water. The bus has fallen in this canal. The bus is completely submerged in water. Heart dissecting phenomenon. The water supply from Bansagar Dam has been stopped so that the bus can be easily accessed. 7 people have been saved safely. SDRF team is engaged in relief and rescue work. The administrative staff is also on the spot.

Sources say that the death toll in this accident may be more than 30, this is because the bus is completely submerged in water.

Facebook
Twitter
Pinterest
WhatsApp
Previous articleRescue cat with heart-shape on its fur is suffering from frostbite
Next articleChennai Test: India’s 317-run victory over England with a claw of alphabets
Team Janmat Samachar