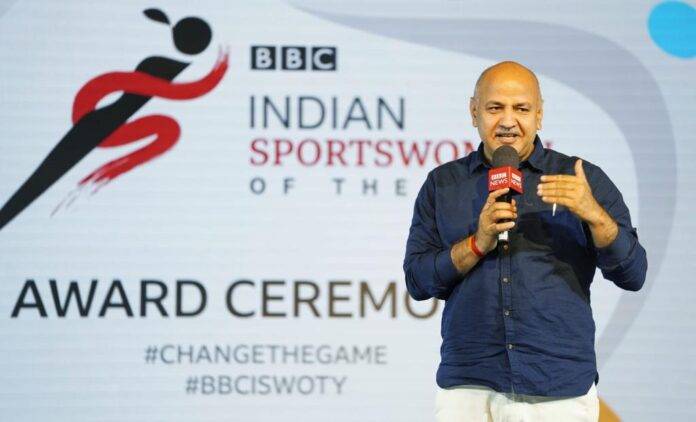 NEW DELHI:  Deputy Chief Minister Shri Manish Sisodia presented the awards to Indian players at BBC Indian Sportswoman of the Year Awards on Monday. The third edition of BBC Awards marked the achievement of Indian women in the field of sports. Congratulating the winners, the Deputy Chief Minister said that events like these convince sportspersons that their contribution to the development of the country is valuable.
Congratulating the awardees, especially women he said that women are excelling in all fields today be it education, administration, or sports. I am happy to see so many women leaving their mark in the field of sports. They are an inspiration to the girls of the next generation who are pursuing sports or want to enter into this arena, he added.

Shri Sisodia said that women in sports have to go through several barriers when it comes to convincing parents, getting training and achieving their goals. The Kejriwal government is determined to provide them with the required support at every step. For this, Delhi Government has built several sports facilities across Delhi Government Schools to train students professionally and help them to participate in various national and international games.

He added that Delhi Sports University, a dedicated institution to sports has been set up by the Delhi Government which will begin the training of 250 budding sportspersons from the upcoming session. It will have the best-trained coaches and sportspersons to train the students at the international level.

The BBC’s Indian Sportswoman of the Year Award was given to Olympian Chanu Saikhom Mirabai, Indian Cricketer Shefali Verma was awarded the Emerging player of the year award. *Retired Indian Weightlifter and Vice-Chancellor of Delhi Sports University Karnam Malleshwari was conferred with the Lifetime Achievement Award*

Speaking at the award ceremony, Ms. Karnam Malleshwari said that it is a great opportunity for me to be appointed as VC of Delhi Sports University. I missed the gold medal by just 2 kgs in the Sydney Olympics 2000. As a mentor, I will put all my efforts into bringing it home.