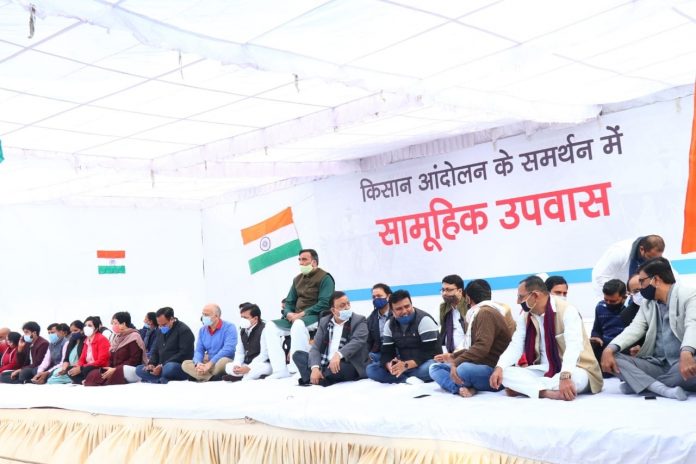 NEW DELHI| Delhi Chief Minister Arvind Kejriwal, while supporting the farmers, observed a day-long fast on Monday. Apart from the Chief Minister, his entire cabinet was also involved in this fast with him. On the appeal of Arvind Kejriwal, several MLAs and other leaders of the Aam Aadmi Party sat on a collective fast in support of the farmers on Monday. A mass fast was organized by the Aam Aadmi Party at the party headquarters in Delhi in support of the farmers. More than 50 MLAs, councilors and hundreds of activists, including Delhi Deputy Chief Minister Manish Sisodia, Environment Minister Gopal Rai, Health Minister Satyendar Jain, MLA Atishi were present in this collective fast.

Meanwhile, Delhi Deputy Chief Minister Manish Sisodia said, “Three agricultural laws made by the central government have come into force all over the country. Due to which farmers are very unhappy. Now they are not able to get that much money. Has been. Farmers are agitating against this. They are down on the streets. ”

According to Deputy Chief Minister Manish Sisodia, some people performed this fast at their home. Delhi government ministers and legislators fasted at the Aam Aadmi Party headquarters. The Delhi government says that these three bills brought against the farmers should be withdrawn. This has scared the farmers of the whole country.

Delhi Health Minister Satyendra Jain said, “All of us, under the leadership of Arvind Kejriwal, fasted to give their support in the fight for the honor of our donors. Hindustan should see and remember forever how BJP has forced the donors for this fast. ”

During his fast, Deputy Chief Minister Manish Sisodia said, “Ever since the Kejriwal government has forbidden the stadiums of Delhi to be jailed, all kinds of acts have been initiated against us. The dharna is being organized outside the CM residence. . Cameras are being broken. BJP workers enter my house, but we are not going to come under pressure.