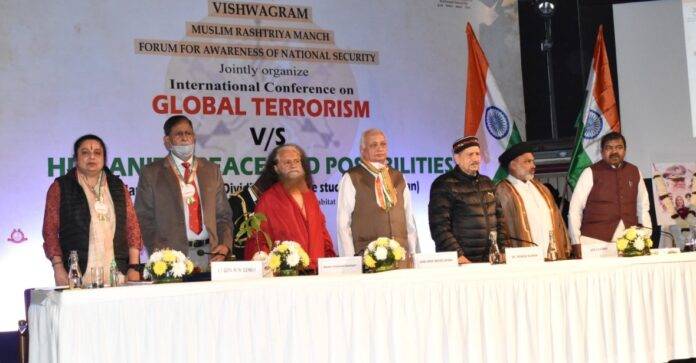 The Conference started with paying tribute to Gen. Bipin Rawat by observing a two-minute silence.

Prof. Geeta Singh ji, Director of the Centre for Professional Development in Higher Education, Coordinator of Vishwagram and a member of the board of conveners for the conference, stated: “when the Taliban ran over Afghanistan, fearful women were seen scampering to stock their burqas, well aware of the primordial chains that were set to clasp them and drag them away from their hopes of progress. In order to comprehend the tremendous threat that fundamentalist terror poses to one-half of humanity, one merely needs to recall the grotesque physical, mental, and social horrors suffered by the women who fell prey to ISIS not too long ago. South Asia ironically remains one of the most fertile grounds for Islamist fundamentalism and the terrorism it creates despite being home to millions of Muslims, a melting pot of cultures, and an engine of Asia’s economy. From the Taliban to HuJI, Lashkar-e-Taiba to Indian Mujahideen, some of the world’s most notorious and violent peddlers of jihad have thrived in the region by feeding off the socio-economic strife and insecurities of everyday Muslims. Many such jihads within the region have worryingly emanated from India’s immediate neighborhood, curbing which has remained a lasting priority for New Delhi.” She further added that terrorism can be countered by adopting the precepts of Sanatan Dharma, which teaches universal brotherhood and peace.

In his statement, Dr. Indresh Kumar Ji, National Executive Member, RSS shared his vision about the conference by observing: “the world continues to confront the pressing problems of terrorism, violence, and fundamentalism. Owing to these, we still witness the emergence of repressive regimes and intolerant societies which coercively oppress their own populations in the name of religious fundamentalism. The Taliban in Afghanistan has surfaced as the most recent manifestation of this scenario, representing one of the most horrendous expressions of the challenge of global terrorism to the existence of humanity. In order to confront such a challenge, our approach must be to deal with the larger problem of global terrorism with the transcendental instrument of human values. India, a land of multiple faiths, a tolerant and inclusive culture, and a vibrant society that prides itself on its many festivals, can show the way forward in this regard. The conception of India as a land of cohesive cultures can provide an apt global model for creating an inclusive society.”He explained a broader and in-depth meaning of dharma by associating it with humanity. According to him different methods of worship are the main reasons behind all the conflicts, fundamentalism, terrorism, and expansionism that we are finding in China. He also provides valuable insights about education by associating it with humanity which can only be accomplished by making education culture and value-laden. Education without values is also one kind of terrorism with which we all are livingand it is perpetuating structural violence.

Shri Arif Mohd. Khan, Governor of Kerala, stated that in the Hindu faith, the word blaspheme has no counterpart. He shed some light on Islam’s teachings and how fanatics are the ones that violate them. He argued that tapah is the Sanskrit term that is closest to the word Jihad, which actually means self-purification. Khan reiterates the Quran’s core teachings, which call for peace and unity and forbid violence.

Gen. V. K. Singh, MOS, Govt. of India pointed out that in history as well as in present times we can see that groups and organizations that use violence to attain their goals are always intricately related to one another. As a result, the goal for the elimination of terrorism is not to concentrate solely on a single geographical place. He went on to explain that in order to obtain an advantage over the Soviet Union, the United States mobilised Afghans under the guise of religious orthodoxy, who were later known as mujahideens. This action on the side of the United States was ineffective because the mujahideens could not be brought completely under American authority. Even if the Taliban were successful in controlling the mujahideens, the methods used resulted in more instability than maintaining law and order.

Dr. Imam Umer Ahmed Illiyasi, Chief, All India Imam Organization discussed about how terrorism is a danger for the whole humanity. According to him terrorism should not be associated with any religion, asreligion is all about peace. Islam too is all about peace and well-being of the people, so he was against the idea of running terrorist groups in the name of Mohammad and criticized terrorist groups like JaisheMohammad and Lashkar-e- Taiba. He further emphasized that religions can be different but the biggest religion is humans and humanity. We should understand and respect each other’s religion. He appreciated the repeal of Article 370 as it has made the Kashmiris realize that they are also part of India.

Dr. Subhas Sarkar, MOS, Education, Govt. of India, put forward the point that how Modi government is successfully dealing with the problem of terrorism. Referring to our Prime Minister, Sarkar emphasized not to use terrorism as a political tool because it can prove to be dangerous for all the states. He also warned about using Crypto currency and Bitcoins carefully so that it could not be used by our young generations in a negative manner.

Shri Prakash Javadekar, M. P. Rajya Sabha stressed that terrorism emerges from the heart of the culprit where the culprit believes in violence and injustice. He further explored the intricacies of terrorism which needs networks, funding, people, organizations for its working. According to him we are now living in a new Bharat that has come into existence after Pulwama, Balakot and surgical strike. The Govt. in new Bharat has taken certain steps to stop terrorism such as it has attacked on terror funding. Now incidents of stone-pelting are not taking place in Kashmir. He further emphasized that poverty and illiteracy are not the reasons for the emergence of terrorism as we have seen that terrorists are also well-educated and well-earning people.

Shri Ashok Sajjanhar, Former IFS discussed the Indian values on which the idea of India is based. He emphasized that Indian values have been derived from our 5000 years old civilization. Though many foreign thinkers proclaimed that after independence India will not be able to remain democratic for long, because of its diversity, India came out to be one of the most successful democracies in the world as it never sacrificed on its core principles. Expressing his views on terrorism, Shri Sajjanhar argued that there is no such distinction as “good terrorist” or “bad terrorist”. Hence, not a single country in the world has recognized the rule of the Taliban in Afghanistan.

Maj. Gen. Dhruv Katoch (Retd.) emphasized that it is incorrect to refer to Afghanistan as the “graveyard of empires.” He explained that the United States faced defeat at the hands of the Taliban since their war was centered on Afghanistan, whereas the Taliban’s actual support base was in Pakistan.

Prof. Sanjeev Kumar HM, Department of Political Science, University of Delhi, emphasized on the hermeneutic re-reading of the Bhagwat Gita for the purpose of constructing an ethically upright community which will itself act as an instrument to negate all forms of structured violence and atavistic notions of fundamentalism.

Shri. P. Stopdon, Former Ambassador, mentioned that terrorism is not a disease. Terrorism, on the other hand, is a symptom of something more sinister, and it has been exploited as a tool by various parties. Hence, he emphasized that the fundamental reason of terrorism must be identified.  India’s main and primary concern and goal in Afghanistan must be the security of Indian nationals, which he emphasized, India has largely accomplished.

After rigorous deliberation, these participants commonly agreed to the notion that Global terrorism and religious Fundamentalism pose serious threats to national as well as human Security. Based on these ideas, the participants solemnly resolved and put forth a conference declaration which largely emphasized that:

1. Given its vast and diverse ethnopolitical fabric, South Asia continues to remain vulnerable to the clutches of fundamentalist terror despite consistent unilateral and multilateral efforts to repel them. Therefore, it is all the more necessary that such efforts continue to strengthen and streamline. In this regard, India, a geographical, demographic, economic, and civilizational giant at the heart of South Asia must responsibly take the lead in securing the lands between and neighboring Kailash and Kanyakumari.