Home Entertainment Devoleena Bhattacharjee celebrated her 9 years in the industry with cakes and...
Entertainment 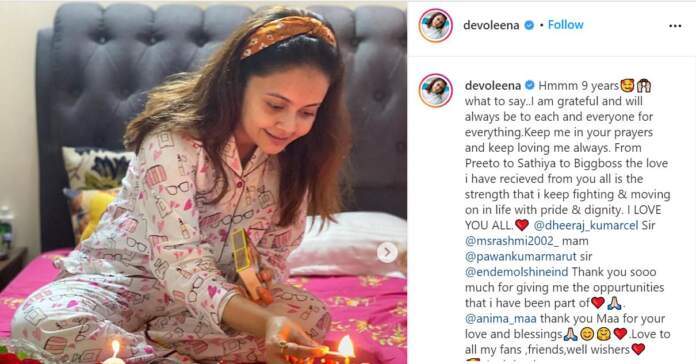 Devoleena Bhattacharjee Bigg Boss: She was already a known name even before participating in Bigg Boss 13, then a role in star plus drama saath nibhaana saathiya, NDTV Sawaare Sabke Sapne Preeto. The kind of fame she received post her stint in the reality show. The actress who is currently enjoying her quarantine break at home has shared a post on Instagram one day ago. She has completed nine years in the industry. She shared many photos of her cutting cakes with her pet dog.

She wrote: “Hmmm 9 years, what to say..I am grateful and will always be to each and everyone for everything.Keep me in your prayers and keep loving me always. From Preeto to Sathiya to Biggboss the love i have received from you all is the strength that i keep fighting & moving on in life with pride & dignity. I LOVE YOU ALL. @dheeraj_kumarcel Sir @msrashmi2002_ mam @pawankumarmarut sir, @endemolshineind Thank you sooo much for giving me the opportunities that i have been part of. @anima_maa thank you Maa for your love and blessings.Love to all my fans ,friends,well wishers. And thank you @kunapareddyveera37 & Sagar for the cakes & flowers. #9yearsandcounting #blessings #gratitude.

Devoleena feels proud of not dating domeone in big boss 13

After coming out of the reality show, Bigg Boss 13, Devoleena spoke about her experience and Devoleena states that she feels proud of her journey in Bigg Boss and was glad about not being linked up with anyone on the show. Here’s what she said, “I’m not sorry but proud of myself… that I didn’t make headlines because of dating someone or being dependent on a guy to survive. People saw me putting all efforts into every task… I was loved and I’m happy.” The actress also revealed the way she faces difficult moments in her life and the kind of attitude she has in those situations.

Devoleena Bhattacharjee was born on 22 August 1985 to a Bengali family in Upper Assam. She did her schooling from Godhula Brown Memorial English High School in Sivasagar, Assam and her higher studies from the National Institute of Fashion and Technology in New Delhi, India.

She was first noticed when she auditioned for the dance reality series Dance India Dance 2. Her acting debut was in NDTV Imagine’s Sawaare Sabke Sapne Preeto as Bani. In  June 2012, Devoleena was cast as Gopi Modi, a lead character in the Star Plus drama Saath Nibhaana Saathiya after Giaa Manek, who previously played the role, was ousted from the series. In 2019, Devoleena joined as a celebrity contestant in thirteenth season of the reality TV show Bigg Boss.

Indian American : Kamala Harris of the Democratic Party may be the Vice Presidential candidate in November elections 🇺🇸