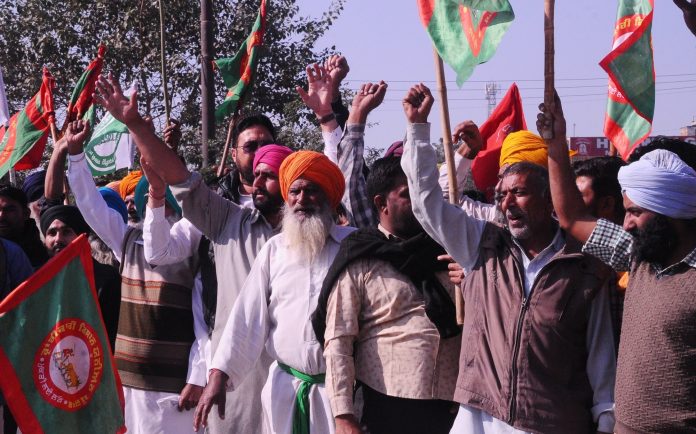 NEW DELHI| The agitation of farmers continues against the new agricultural law implemented by the central government on Monday for the fifth day. Protesting farmers on the borders of Delhi, the country’s capital, are demanding the withdrawal of new agricultural laws. Farmer leaders said that a core committee meeting of representatives of various organizations is going to be held in a while in which the strategy will be decided. Meanwhile, the Bharatiya Janata Party national president J.P. on Sunday after the farmers’ leaders rejected the government’s proposal to talk to them the very next day after the protesters came to Burari Ground. A meeting was held in this regard at Nadda’s residence in which Union Home Minister Amit Shah and Agriculture and Farmers Welfare Minister Narendra Singh Tomar were also present.

On Saturday, the Home Minister appealed to the farmers to come to Delhi’s Burari Ground to protest and assured them that the Government of India is ready to discuss with them on the second day of Burari Ground Shift.

However, the farmers refused to accept his appeal as a conditional proposal and decided to stay on the borders of Delhi. This farmers’ movement has now entered the fifth day and its scope is gradually increasing. Traffic on the GT Road, the main road to North India, has been disrupted due to demonstrations by farmers. Farmer leaders have also announced closure of other routes entering Delhi.

Harendra Singh Lakhowal, general secretary of the Bharatiya Kisan Union (Lakhowal), said that all the farmer organizations have decided that they will sit here (Singhu border) and will also block other roads leading to Delhi in the coming days.

The three new agricultural laws implemented by the Modi government include the Farmers Produce Trade and Commerce (Promotion and Simplification) Act 2020, the Farmers (Empowerment and Protection) Price Assurance and Agreement on Agricultural Services Act 2020 and Essential Commodities (Amendment) Act 2020. The protesting farmer leaders say that these three laws do not benefit the farmers, rather they will benefit the corporate, so they are demanding to withdraw them.

Delhi Govt sends notice to 5,584 comaniesp under GSTR act 3A for not filing tax returns

Aman Raino, Director of NIPS : Future prospects of English language are quite scintillating