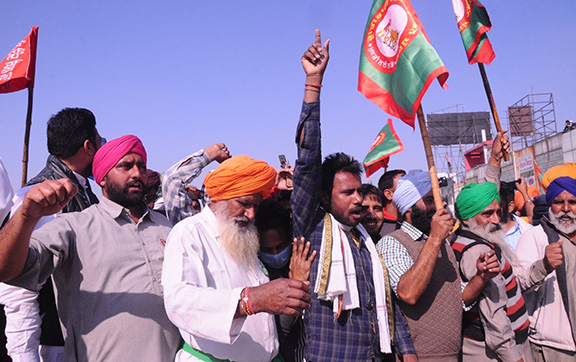 New Delhi: With the call for ‘Chalo Dilli’ made by the All India Kisan Sangharsh Coordination Committee (AIKSCC)  farmers have been marching to the capital from different states of India, including Punjab, Haryana, Uttar Pradesh, Uttarakhand and Madhya Pradesh, determined to get the rollback of the new farm bills.

Rather than trying to understand or address the concerns, farmers have been raising, the government led by Shri Narendra Modi has only called these protests as ‘misguided’ or ‘influenced’ by those wanting to take the country back in terms of development. It has placed full-page ads asking farmers to ‘beware of lies!’ For a government committed to the cause of farmers, it seems ironical that they had to take the ordinance route, and bend the norms and established rules in Parliament. The agitation led by opposition parties along with the protest of the farmers has been met with forceful resistance – and even the basic right to protest has been heavily curtailed.

The farmers of this country have organized regular protests in the past years to ensure the government pays enough attention to the falling incomes of farmers and the difficulties thrust upon them. Ill-conceived legislations like The Farmers’ Produce Trade and Commerce (Promotion and Facilitation) Bill, 2020, The Farmers (Empowerment and Protection) Agreement of Price Assurance and Farm Services Bill, 2020, and The Essential Commodities (Amendment) Bill 2020 have taken the struggle at an altogether different plane. The Union government sticks to its own lies – telling everyone that the three laws are aimed at transforming agriculture in the country and raising farmers’ income. The provisions, it says, will enable barrier-free trade in agricultural produce and empower farmers to engage with investors of their choice.

Agricultural experts have expressed their reservations about the bills. These bills have generated a lot of suspicion as they were passed through the ordinance route. The new bills state that the foodgrain trade will be in the hands of private traders, without enacting any safeguards. The majority of farmers in India are small and marginal farmers. They usually wait for the crop to be harvested in order to fulfill their basic needs. They don’t have the capacity to trade the food at distant places. Therefore, the claim that farmers will have the freedom to sell does not hold true. Giving private players the freedom of foodgrain trade without any regulation will eventually lead to the emergence of monopolies, oligopolies, or a cartel system.

86% of Indian farmers have less than five acres of land, and 67% of farmers have less than two and a half acres of land. These are the victims of the grave economic crisis. How can these small farmers sell their produce in other markets? What is the purpose of new markets if small farmers cannot participate in them? How will the new private markets operate? These new markets will not have any regulation and they won’t be taxed by the State government. State governments will regulate only the already running markets.

Farmers have had to face obstacle after obstacle placed in their way by Haryana and Uttar Pradesh governments, and possibly the union government in an attempt to use every possible means to stop them – numerous barricades, heavy container and sand-laden trucks in multiple layers, barbed wire fences, huge boulders across the roads, water canons, tear gas and amazingly even deep trenches dug up on our highways and roads. All of this done to stop citizens who toil with the soil and bring food to our plates from peacefully approaching the central government and the capital city with their grievances! North India is experiencing a bitter winter and if our toiling and usually patient farmers have felt compelled to brave the cold and an arduous journey to speak their mind on the farm bills in the national capital, it is even more apparent to all that safe passage and a free and fair hearing is their inviolable right.

Despite the blockades and hardships, thousands of farmers managed to reach the borders of the capital region of the country, and many others led by various national and regional platforms of farmers organizations, loosely coordinated by the Samyukt Kisan Morcha are persisting with moving forward on their Dilli Chalo program. The voices of farmers and agricultural labourers have been ignored, their concerns not taken into account when framing the ordinances or passing them as Acts in Parliament. Representations given to the government on the issue multiple times in agitations by farmers and their organizations across India are yet to receive replies. Only after such countrywide outrage and violence against farmers, has the government come out of their hiding and is trying to diffuse the situation – again with threats to organizing groups, and using paid media to create rhetoric on the country and development agenda.

Bhumi Adhikar Andolan stands in solidarity with all protesting farmers – young and old, men and women, agricultural workers and migrant workers, workers in the informal economy, forest dwellers and adivasis who have together resisted attempts to malign their protests and have come together to demand their constitutional rights.

We also call upon the people of this country to reject the anti-people and pro-corporate agendas of the union government and ask the state governments to come together to resist the attempts at dismantling the federal structure. We demand the judiciary to actively come forward and make sure no coercive action is taken against any protesting farmer and put an end to the rabid allegations against farmer organizations and their leaders by paid media channels and other political leaders.

M umbai is a cosmopolitan city known for its many lip-smacking dishes. Be it vegetarian or non-vegetarian, the dishes in Mumbai boast of rich...
Read more

After the suicide of Bollywood actor Sushant Singh Rajput, his pet dog Faz has received a big setback. He is constantly missing...
Read more