Home Politics Mamta dedicates victory to people, the party said, do not speculate on...
PoliticsTop Stories

Mamta dedicates victory to people, the party said, do not speculate on Nandigram 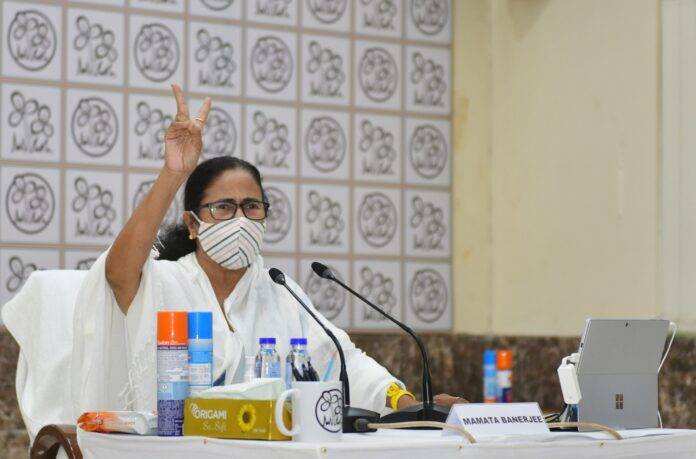 Kolkata| The Trinamool Congress is set to return to power for the third consecutive time in West Bengal and Chief Minister Mamata Banerjee on Sunday dedicated this victory to the people of West Bengal. Along with this he also took sarcasm at both the Election Commission and the BJP. However, the Trinamool supremo has suffered a major setback in Nandigram, where his close aide Suvendu Adhikari, who later joined the Bharatiya Janata Party (BJP), defeated him in a close contest. However, the Trinamool Congress has not yet accepted the verdict and claimed that the counting of votes is still going on.

TMC shared a post on its official tweet saying that the counting process of Nandigram is not complete, please do not speculate.

Speaking at the state secretariat Nabanna, Banerjee indicated to the Election Commission that something had gone wrong in Nandigram.

Mamta said that the Election Commission acted as the spokesperson of the BJP and now see what they are doing. Three hours ago, it said something and now it is saying something else. Let Nandigram take its decision, I will accept it and go to court.

There was also another tweet by Banerjee, in which it was written that to win a big fight you have to sacrifice something.

She was pointing to the confusion that prevailed in Nandigram. Actually, there was an announcement in the beginning that Banerjee had won from Nandigram. Even BJP spokesperson Jai Prakash Majumdar congratulated Banerjee for the victory, but after that, there were reports that Suvendu Adhikari had won.

The Chief Minister also clarified that his fight against the BJP will continue.

Banerjee also announced that there would be no victory procession due to Covid’s position.

He said that the oath-taking ceremony will also be conducted in a modest manner.