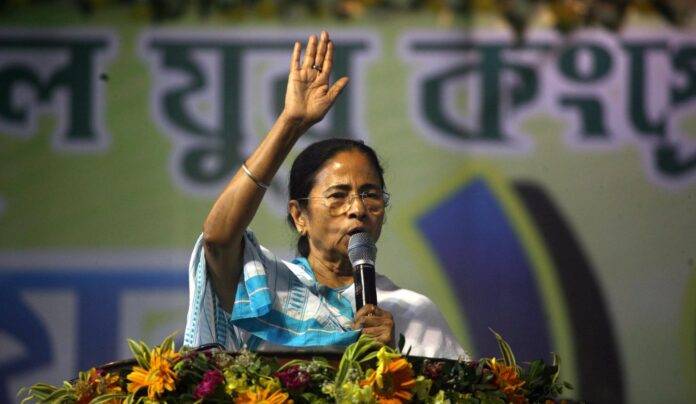 New Delhi| It seems that despite putting all its resources at stake in the West Bengal assembly elections, the BJP will fail to oust the Mamata Banerjee government from power. According to the Times Now / ABP News-CVoter exit poll, the Mamata Banerjee-led Trinamool Congress (TMC) will get a tough fight with the BJP, but ultimately the power will remain with the Trinamool Congress.

According to the survey, BJP will win 115 seats, which is 33 less than the magic figure. The BJP had got only 3 seats in the last assembly election, which is expected to increase by 112 seats this time.

Exit polls suggest that TMC may still manage to win 158 seats, 10 more than the magic figure of 148, despite losing grip at the ground level.

The election results will come for the 292 seats of the West Bengal Legislative Assembly after the death of candidates in two seats.

The exit poll suggests that the Left, which ruled the state for more than three decades, would prove to be a minor player, despite having a pre-election alliance with the Congress.

According to the survey, Congress, Left and ISF had won 59 seats in the last elections, while this time it is estimated to win only 19 seats.

The exit poll shows that TMC is expected to get 42.1 percent of the total votes in West Bengal, with Banerjee’s party getting 44.9 percent of the votes in the 2016 assembly elections, 2.8 percent of its vote share in this year’s election. Is likely to decline.

The BJP’s vote share has emerged as the main challenger to the ruling TMC. The BJP received 10.2 percent of the votes in 2016. This time it is expected to increase by 29.0 percent. BJP can get 39 percent votes.

The exit poll shows that the vote share of the Left and Congress combined was 38.6 percent in 2016, which is now expected to come down to 22.6 percent.

The data shows that the BJP registered its presence in all regions of the states. Out of 26 seats in the delta region, BJP is winning 12 and TMC 14 seats.

Of the 53 seats in the Highland region, BJP can win 24 seats, TMC 26 and Congress alliance three.

The exit poll shows that the ruling TMC is likely to win 30 seats in the 63 seats of the northern border, while the BJP is projected to win 21 seats. The Congress alliance is expected to win 12 seats.

In the northern hills, BJP can win 15 seats out of 28 seats. Banerjee’s TMC hopes to win 12 seats. The Congress and its alliance partners are projected to win only one seat.

Of the 66 seats in the southern fray, the TMC is likely to win 38 seats, while the BJP is projected to win 26 seats. Two seats in the region can be won by the Congress alliance.

Government is making a list of products to compete with China