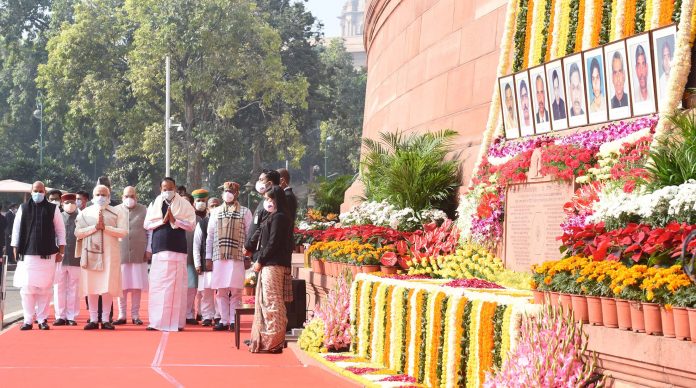 NEW DELHI | Paying tribute to the security personnel who sacrificed their lives in the 2001 Parliament attack, Prime Minister Narendra Modi on Sunday said that the country will never forget that cowardly attack as well as those who have protected the Parliament of the country. He laid down his life. In a tweet, the Prime Minister said, “We will never forget the cowardly attack on our Parliament on this day in 2001. We remember the valor and sacrifice of those who made their supreme sacrifice while protecting our Parliament. India will always Will be grateful to them. “

The country is today remembering the brave martyrs who laid down their lives while protecting Parliament on this day in 2001. Recalling the great sacrifices of the temple’s defenders of our democracy, we strengthen our resolve to defeat terror. ”

Defense Minister Rajnath Singh also said that the country will always remember the valor of such security personnel. Singh said,” I salute the bravery of all the brave security personnel who made the supreme sacrifice in the face of a terrorist attack on Parliament on this day in 2001. ”

Union Home Minister Amit Shah tweeted,” I am those brave sons of ‘Maa Bharati’ I pay tribute to him, who made the supreme sacrifice in the 2001 Cairana terror attack on Parliament. A grateful nation will forever be indebted to you for your immortal sacrifice. ”

The Indian Parliament was attacked on 13 December 2001 by Pakistan-based Lashkar-e-Taiba and Jaish-e-Mohammed militants. Nine people including eight security personnel were killed in this attack. All five terrorists were also killed by the security forces.

New Delhi | On the occasion of Republic Day, clashes between protesting farmers and police were seen at different places in the national capital. Meanwhile, a large...
Read more
Top Stories

2 cases of new variants of Covid-19 were reported in Canada.

Ottawa: Two cases of highly communicable variants of coronavirus found in Britain have been confirmed in Canada. Two confirmed cases have occurred in the Durham...
Read more

Amazon in its hardware event 2020 revealed a new car alarm that will sync with its Ring security devices and be able to trigger...
Read more