Home Crime One notorious snatcher was arrested red-handed by the team of PS civil...
CrimeNationalDelhi 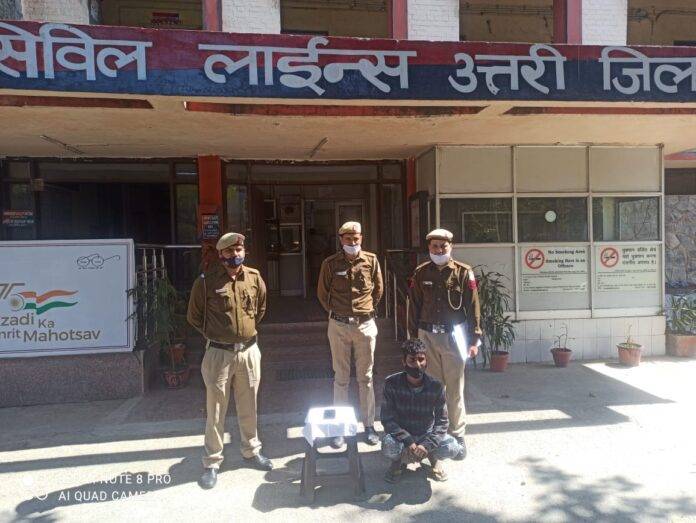 New Delhi:The complainant Shri Pradeep Kumar r/o Jahangir Puri, Delhi, age-35 years, (Who used to ply e-Rickshaw), reported in his complaint that on 27.02.2022 he reached ISBT Kashmere Gate, Delhi from his native village in Uttar Pradesh. At about 05:00 PM, he was waiting for Bus at Mori Gate and was talking on his mobile phone. Suddenly, an unknown person came from ISBT Kashmere Gate side, snatched his mobile phone and ran away from the spot. The complainant raised hue & cry and started chasing the accused.

Fortunately, the above said police patrolling staff was passing through the place of incident and heard the noise, observed the situation and instantly joined the chase. Ultimately after a brief chase of about 100 meters, the police team succeeded in apprehending the suspect. In few moments, the victim also arrived there and alleged that the suspect has snatched his mobile phone.

On personal search of the suspect, one mobile phone make Redmi 9A, Blue colour was recovered from his possession, which was immediately recognised by the complainant as his mobile phone. The accused was identified as Munnawar, age-26 years.

During interrogation, it revealed that the accused is a habitual criminal with a history of involvement in 07 criminal cases of Robbery, Theft and Arms Act registered at different police stations of Delhi. He was released from jail in the month of August, 2021.

The accused is illiterate and worked in a tailoring shop, but he fell in bad company and became drug addict. He started committing crime to fulfil his lust of drugs.

Indian American : Kamala Harris of the Democratic Party may be the Vice Presidential candidate in November elections 🇺🇸