Home Crime One blind robbery case solved within 48 hours with he arrest of...
CrimeNationalDelhi 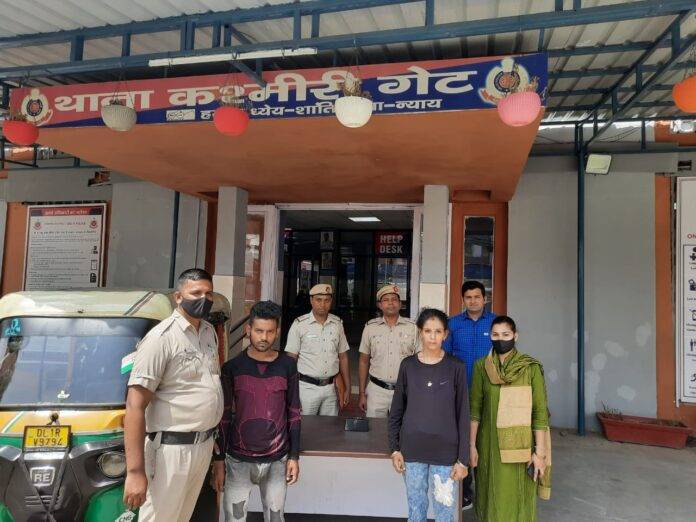 New Delhi: By exhibiting brilliant professional competence, the dedicated police team of PS Kashmere Gate worked out a sensational blind robbery case with the arrest of two accused persons including a lady accused involved in the offence. The TSR used in the commission of offence and a robbed mobile phone has been recovered.

On 21.03.2022, an information regarding robbery in a TSR at Kashmere Gate Bus Stand area was received at PS Kashmere Gate. Immediately, SI Sonu Kumar of PS Kashmere Gate reached the spot and met the complainant. The complainant Shri Gagandeep Singh Sachdeva r/o A-Block, Chhatarpur Extension, Delhi, age-25 years, (Who is an painter & artist by profession) stated in his complaint that he came to Delhi from Dehradun via Bus and de-boarded from the bus at the Out Gate of ISBT at around 04:20 AM. He boarded a TSR to reach his residence, in which already 3 persons i.e. two ladies and a male were found sitting at the back seat. While another lady sat on the side pipes of the TSR, another lady informed him that she has to de-board on the way, so the victim sat at the middle of that lady and the male person.

On the way, the male suspect informed him that he has to take his bag from behind, so the victim turned around. Suddenly, the male choked his neck from behind and the ladies pressed his legs, and they robbed his mobile phone, cash Rs 10,000/- and bag containing clothes etc. Due to the

choking, he fell unconscious and he was thrown out of the TSR near Signature Bridge by the alleged persons.

It was a blind robbery case and there was no clue about the accused persons. The above said police team conducted technical investigation and around 100 CCTV cameras leading to the place of occurrence were checked and analysed. On detailed analysis of CCTV footages, the registration number plate of the suspected TSR was identified. Thereafter, it’s ownership was obtained and it was revealed that the owner of suspect TSR is Bhim Singh Mehra, r/o Jhosi Colony, East Delhi.

On enquiry in Joshi colony, Delhi area, it revealed that Bhim Singh Mehra has died 02 years ago and he was living there on rented accommodation and he was unmarried so nothing was found there.

Thereafter, suspected TSR finance company detail was obtained and while working on that channel it revealed that at present the owner of the suspected TSR is one Lal Singh Sharma r/o Shiv Vihar, Loni, Gaziabad, Uttar Pradesh.

On enquiry from Lal Singh Sharma, it was found that he has given his TSR for driving to one person namely Irfan r/o Laxmi Garden, Indira Puri, Loni, Gaziabad, Uttar Pradesh on rent basis. Thereafter, Irfan was interrogated and it was found that he has further given the suspected TSR for driving to Punit r/o Laxmi Garden, Loni Gaziabad, Uttar Pradesh.

Immediately the team conducted raid and Punit and his wife Shivani @ Poonam, age-22 years were apprehended on 23.03.2022 and interrogated separately.

During interrogation, they confessed about committing the robbery with the complainant along with their associates namely Sudhir and his wife Bhoori @ Komal @ Abrin r/o Loni, Gaziabad on 21.03.2022.

Accordingly, the accused Punit, age-23 years and his wife Shivani @ Poonam, age-22 years were arrested and robbed mobile phone, make Samsung and a TSR used in crime were recovered at their instance.

During interrogation, the accused persons disclosed that in the morning hours of 21.03.2022, they along with co-accused Sudhir and his wife Bhoori @ Komal @ Abrin offered the victim a ride their TSR who had to go his residence in Chhattarpur, Delhi. On the way, they robbed the victim and fled away to Loni, Ghaziabad, UP.

Raids were conducted at the possible whereabouts of the alleged co-accused persons Sudhir and his wife Bhoori @ Komal @ Abrin, but they were found absconding.

 The TSR used in commission of crime.

Further, investigation of the case is in progress and efforts are being made to nab the co-accused Sudhir and his wife Bhoori @ Komal @ Abrin and to affect more recovery.

Joe Biden’s son said – My tax matters are under investigation