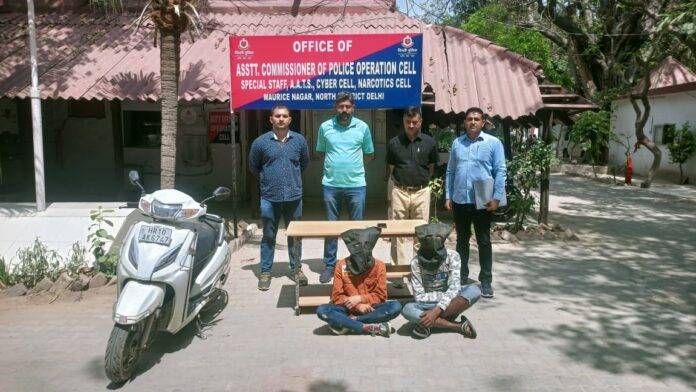 On 29.03.2022, the above said police team of Special staff received secret information through reliable sources that two criminals involved in Snatching cases are roaming in the area of Wazirabad on a Scooty, if raid is conducted well in time, they might be apprehended.

As per the direction of the senior officers and working on the secret information, the above said police team of Special Staff rushed to the place of information and laid a trap. The efforts of the team bore fruits at about 04:30 PM, when the team noticed two suspects riding on a Scooty at RCC Road, Wazirabad, Delhi. The suspects were signalled to stop for checking but they tried to escape from the spot. However, the dedicated police team instantly swung into action and succeeded to overpower both of them along with the Scooty.

On their cursory search, one mobile phone, make Realmi, one Aadhar Card and One Debit Card recovered from their possession. On verification the recovered mobile phone Realmi was found as snatched vide e-FIR No 909/21, dated 29.09.2021, PS Kotwali and Aadhar Card & Debit card were found snatched vide FIR No. 34/22, u/s 356/379/34 IPC, PS Maurice.

The accused persons were identified Rahul, age-20 years and Naresh, age-19 years. Accordingly, they were arrested u/s 41.1 (d) & 102 Cr PC at PS Wazirabad Delhi and investigation was taken up.

During interrogation, the accused Rahul and Naresh confessed about their involvement with their co-associate namely Vijay @ Sunny in case FIR No. 34/22, u/s 392/34 IPC, PS Maurice. They disclosed that on 11.03.2022, they snatched a mobile phone from a boy and a bag containing two mobile phones and some documents etc. from a girl who were walking together in Bonta Park, Maurice Nagar, Delhi.

Further, the accused Naresh revealed that he snatched the recovered mobile phone from a person in Chandni Chowk area about 06 months ago. In this regard a case vide e-FIR No 909/21, dated 29.09.2021 was found registered at PS Kotwali on the complaint of Shri Kapil Jain, r/o District Jabbalpur, Madhya Pradesh, who came to Delhi for his business purpose.

During interrogation, both the accused persons disclosed that they stole the recovered Scooty near Tis Hazari Court Complex about 15-20 days ago. In this regard a case vide e-FIR No. 005834/22, dated 06.03.2022, u/s 379 IPC was found registered at PS Kashmere Gate on the complaint of Shri Ram Prasad, r/o Ashok Vihar, Sonipat Haryana, who had come to attend the hearing at Tis Hazari Courts, Delhi.

Later, raids were conducted at the possible whereabouts of the co-accused Vijay @ Sunny, but he was found absconding.

03 cases of Snatching and Theft worked out with their arrest.

Raids are being conducted to nab the co-accused Vijay @ Sunny and affect the remaining recovery.

10 Tips for an awesome lifestyle