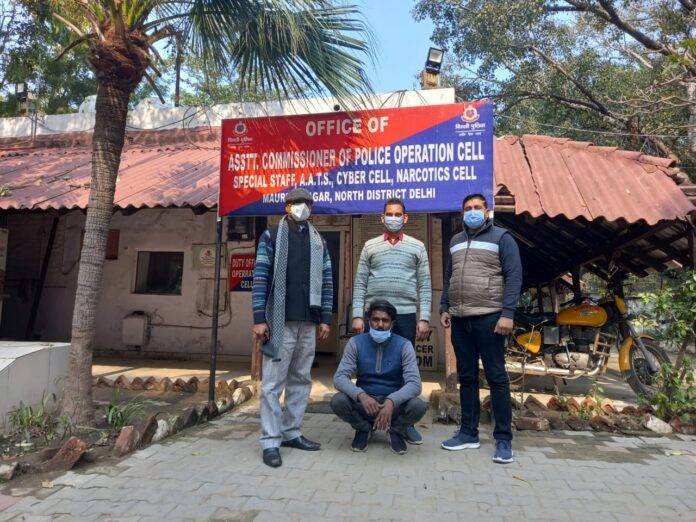 New Delhi: As per the directions of the senior officers, the dedicated team of Special Staff, North District Delhi was working to gather information regarding Proclaimed Offenders in Delhi and other areas of NCR.

Accordingly, as per information at around 12:45 PM, a strategic trap was laid near Mandoli Chungi Nand Nagri, Delhi. After waiting for some time, one person was noticed coming from Nand Nagri side toward Mandoli Chungi. The secret informer indicated towards him and confirmed as the suspect. By showing great sense of responsibility and professionalism, the suspect was apprehended and overpowered strategically without giving him any chance to flee away from the spot. The suspect was identified as Ravi @ Badshah r/o Wazirabad Village, Delhi, age-43.

Accordingly, the offender was arrested u/s 41.1 (C) Cr.PC at PS Maurice Nagar and further investigation of the case was taken up.

During sustained interrogation, it was disclosed by the accused that he used to work as MTS in a Government Department on contract basis. He caused injuries to his uncle Narender and his family members in a quarrel taken place on 01.10.2019 in a family dispute. Since then, he was hiding himself to evade his arrest.

He was residing on rent basis in the area of Nand Nagri, Delhi and was changing the accommodation on regular basis to keep away from the clutches of police.

Himmatnagar (Gujarat)  | A minor girl was allegedly forced into prostitution by her own mother. Subsequently, the 16-year-old girl was exploited by her mother's boyfriend and...
Read more