Home Crime One accused of firing incident occurred in the area of ps subzi...
CrimeNationalDelhi 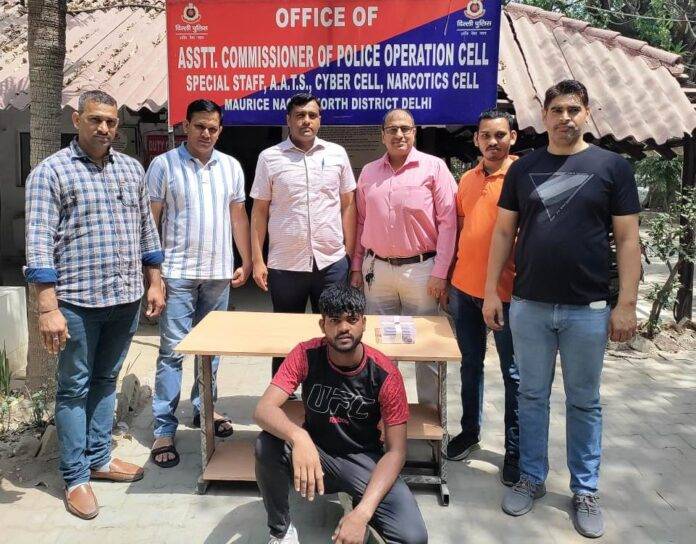 New Delhi: On 15.04.2022, a lady complainant r/o Deena Nath Road, Roshanara Road, Subzi Mandi Delhi, age-33 years, (Who is a house wife), approached PS Subzi Mandi and reported in her complaint that on 14.04.2022 at about 11:30 PM she was present in her house and was cooking food. In the meantime, she heard the noise of firing outside her house. When she peeped from the balcony of her house and she noticed three unknown persons there who were muffled their face. One of them having pistol in his hand and another was making video through his mobile phone. Later the person having pistol in his hand again opened fire in air and all them fled away from the spot. Accordingly, a case vide FIR No. 253/22, dated 15.04.2022, u/s 336 IPC & 25, 27 Arms Act was registered at PS Subzi Mandi, Delhi and investigation was going on.

A dedicated police team of Special Staff team led by SI Vineet Kumar, comprising of ASI Yashpal, HC Ansar Khan, Ct Ravinder and Ct Ajay, under the close supervision of SI Manmeet Malik, (In-charge Special Staff) and guidance of Shri Keshav Kumar Nihal, ACP/DIU North District has been working relentlessly and developing information about the criminals active in the area and they also used to patrol randomly in the area during odd hours to keep a check on their illegal activities.

On 15.04.2022, at about 06:00 PM, a secret information was received by the above said police team through their reliable sources that a person involved in firing incident of PS Subzi Mandi who also involved in many criminal activities would come to meet his known persons near at Roshanara Club, Roop Nagar, Delhi. If raid is conducted well in time, he might be apprehended with the firearms. The received secret information was conveyed to the senior officers.

As per directions of senior officers and working on the secret information, the above said police team of Special Staff North District without wasting any time, rushed to the place of information and laid a strategic trap there.

On his cursory search, 01 Semi-Automatic Pistol along with magazine loaded with 03 live cartridges was recovered from his possession. The accused was identified as Makhan @ Shahid @ Israfil, age-22 years. Accordingly, a case vide FIR No. 133/22, dated 15.04.2022, u/s 25 Arms Act was registered at PS Roop Nagar, Delhi and investigation was taken up.

During interrogation, the accused Makhan @ Shahid @ Israfil, age-22 years revealed that 2/3 years ago during his imprisonment in Tihar Jail he came to the contact of a person namely Karan @ Pandit, r/o Subzi Mandi, Delhi. About one week ago Karan @ Pandit again met him during his hearing in Rohini Court and the accused was directed by him to further meet his two friends in front of Aggarwal Sweets, Subzi Mandi Ghanta Ghar, Delhi on 14.04.2022 at 09:00 PM.

Consequently, on 14.09.2022 at 09:00 PM, the accused Makhan @ Shahid @ Israfil met both of them at the above said place who took him in front of House No. XXXX, Deena Nath Road, Roshanara Road, Subzi Mandi and handed over a loaded pistol. As per their direction the accused opened fire 03 times in the air and all of them fled away from the spot.

Next day i.e. 15.04.2022 during evening hours the accused Makhan @ Shahid @ Israfil also came in the area of Roop Nagar to commit crime as per the directions of alleged two persons, but he was apprehended by the police team along with weapon.

The accused is a habitual criminal with the history of involvement in 03 cases of Dacoity with Murder, Theft and Hurt registered in police stations Jahangirpur, Mahendera Park and Bhalaswa Dairy, Delhi. He was released from jail in April, 2021 and again indulged in criminal activities.

The investigation of the case is in progress and efforts are being made to nab the others criminals indulged in firing incident and affect more recovery.