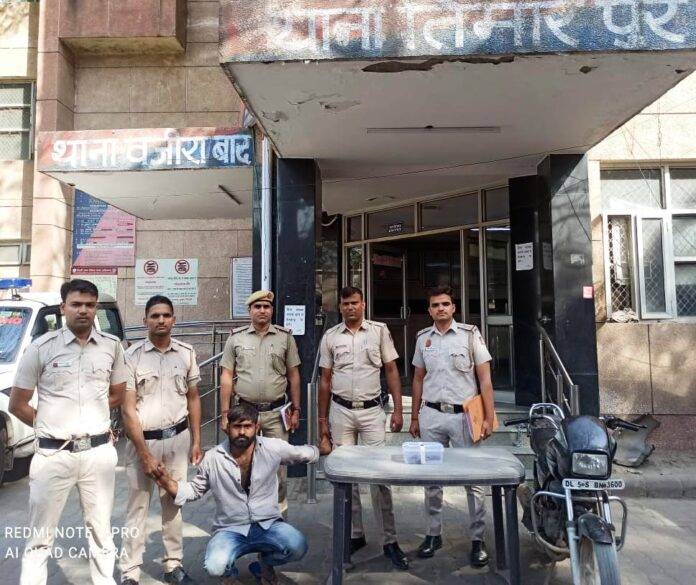 New Delhi: On 14.03.2022, the complainant Shri Tara Chand r/o Jhuggi Nandlal Gopalpur, Delhi, age-45 yeas, (who works as a helper in a shop) was fired upon by motorcycle borne assailants namely Chetan and Kalu, both r/o Gopalpur, Delhi who fled away from the scene. The injured/complainant was rushed to Aruna Asif Ali Hospital, Delhi and was treated there. Accordingly, a case vide FIR No. 148/22, dated 15.03.2022, u/s 307/34 IPC & 25/27 Arms Act was registered at PS Timarpur and investigation was taken up.

Immediately, several teams were constituted by SHO/Timarpur under the close supervision of ACP/Timarpur to apprehend the accused persons. The CCTV cameras available in the vicinity were checked and on enquiry from the family members, it revealed that both the accused persons have been disowned by their respective families because of their criminal conduct. Sources were deployed and his mobile numbers were put under surveillance. The sustained efforts bore fruits and technical surveillance combined with information network a tip off to the effect that Kalu is hiding at 5th Storied House of Gali No. XX Sangam Vihar Wazirabad, Delhi was received to SI Ashok of PS Timarpur on the intervening night of 6/7, 04.2022.

Immediately, a team under the leadership of Inspr. Tribhuvan Negi SHO/PS Timarpur, comprising of SI Ashok, SI Kapil, SI Pradeep, Ct Pankaj, Ct Narender, Ct Sandeep was constituted under the guidance of Shri Swagat Patil Rajkumar, ACP Timarpur and the team reached and surrounded said 5th Story building in order to seal all escape routes. More staff from PS Timarpur & Wazirabad also reached to facilitate combing & search operation. The members knocked the main steel gate of the building as there was no other entry to the building. After some time a person from ground floor came to the gate who was asked to open the gate. As all this took some time, it was enough for Kalu to get alert and some movements were noticed at the top floor of the building where Kalu was present with his girlfriend.

When the team reached at his rented flat he was not found present there and his girlfriend tried to misguide about Kalu. The team searched the terrace and all the flats, but he was not found there. It was noticed by the team that second floor of the building was locked from outside. The lock was broken and the accused Kalu came out with his hands up. He was quickly overpowered by the dedicated and valour police team. At his instance a Country Made Pistol (Deshi Katta) with two rounds in its magazine was recovered from the flat.

During interrogation, the accused Kalu disclosed that he and his associate Chetan had a verbal duel with Tara Chand on 12.03.2022. He and Chetan wanted to teach him a lesson. When they got a chance on 14.03.2022, both the accused persons came there riding on a motorcycle and Chetan fired upon Tara Chand in order to kill him and they fled from the scene.

On sustained interrogation, the accused Kalu disclosed that he has purchased the recovered Country Made Pistol from one Nandu for Rs 50,000/- who met him in the area of Wazirabad about 05 months ago and was using the same to commit criminal activities.

Further, it revealed that the motorcycle used in the incident was stolen by Chetan from Mukherjee Nagar area and the same has been recovered on the instance of accused Kalu which has been seized in police possession. In this regard, a case vide e-FIR No. 005238/21, 23.05.2021, u/s 379 IPC was got registered at PS Mukherjee Nagar.

The accused Kalu also disclosed that he could have fired at police team, but when he saw the team was armed and large in number, he has hidden the pistol. The raids were conducted at the possible hideouts of the co-accused Chetan, but he was found absconding

Further investigation is under progress and all efforts are being made to nab another co-accused namely Chetan involved in this case.

Facebook
Twitter
Pinterest
WhatsApp
Previous articleNDMC organises painting/drawing competition on the theme of “Blooming Gardens of NDMC” to celebrate Azaadi ka Amrit Mahotsav.
Next articleGang of cheats who duped hundreds of youths on the pretext of offering jobs in private airlines, busted by the team of cyber police station, north
Team Janmat Samachar

New Delhi:Police Station Mandir Marg received a call regarding loss of bag of a visually challenged person in an auto-rickshaw. The police took the matter...
Read more