One burglar arrested by the dedicated police team of PS Burari 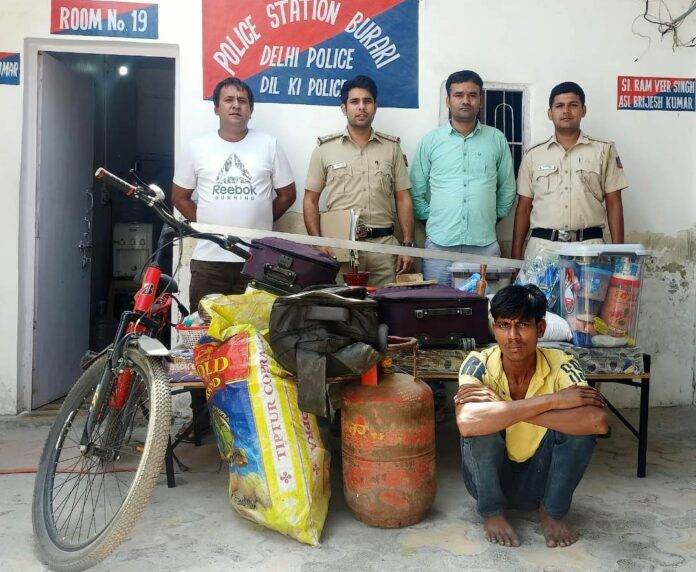 New Delhi: On 26.03.2022, the complainant Shri Dinesh Kumar Mandal, r/o Harit Vihar Burari, Delhi, age-25 years, (who is a mason by profession), approached PS Burari and reported in his complaint that basically he belongs to District Supaul, Bihar and residing at above address on rent who stated that he received Rs 2 Lakhs from his known person and kept the same in his above said rented accommodation. Further he told that on 14.03.2022, one of his companions and known namely Prem Kumar @ Pappan r/o Shastri Nagar, Bulandshehar, Uttar Pradesh came to him at above said room and got aware of the fact that money has been kept in the room by the complainant. In the morning when he the complainant checked, he found that his money has been stolen from his room. The complainant raised suspicion over Prem Kumar @ Pappan.

The above said police team examined the complainant thoroughly who provided a mobile phone number of the suspect. Technical investigation was conducted by the dedicated police team and they tried to trace accused Prem Kumar @ Pappan, but he was found absconding. After taking the GPS locations, CDRs and other technical inputs, raid was conducted at Shastri Nagar, Bulland Shehar, Uttar Pradesh wherein father of suspected person met the police team and he told that his son Prem Kumar @ Pappan is residing somewhere in Burari area, Delhi.

The dedicated police team was working relentlessly and they developed their secret sources to find out any clue about the suspected person. Ultimately, as per the technical investigation and on the basis of secret information, the dedicated police team conducted raid at a rented house of suspect situated at Kargil Colony, Burari, Delhi and he was arrested on 09.04.2022 during evening hours.

During investigation, he confessed about his involvement in the present case of house theft at the rented house of complainant in the morning hours of 14.03.2022. He further disclosed that he has spent whole stolen amount in purchasing domestic as well electronic articles. At his instance all house hold articles recovered and seized in police possession. The accused was identified as Prem Kumar @ Pappan, age-23.

During interrogation, the accused Prem Kumar @ Pappan confessed about committing theft in the rented house of the complainant on 14.03.2022 and he has stolen the cash of Rs. 2 Lakh. Further the accused persons disclosed that he has purchased household articles, Clothes and electronic items with the stolen cash. He also disclosed that after committing house theft, he visited his native place Bihar as well as Uttar Pradesh, Chandigarh & Punjab etc and during this period he stayed in hotels & restaurants and also spent money for his personal needs, eating, alcohol and enjoyments in hotels.

The accused is school dropout and has studied up to 5th standard only, used to work as a mason and also an alcoholic. He felt greedy on seeing the cash of Rs. 2 Lakh kept in the rented house of the complainant and stolen the same.