One notorious robber arrested by staff of ps keshav puram under operation sajag. 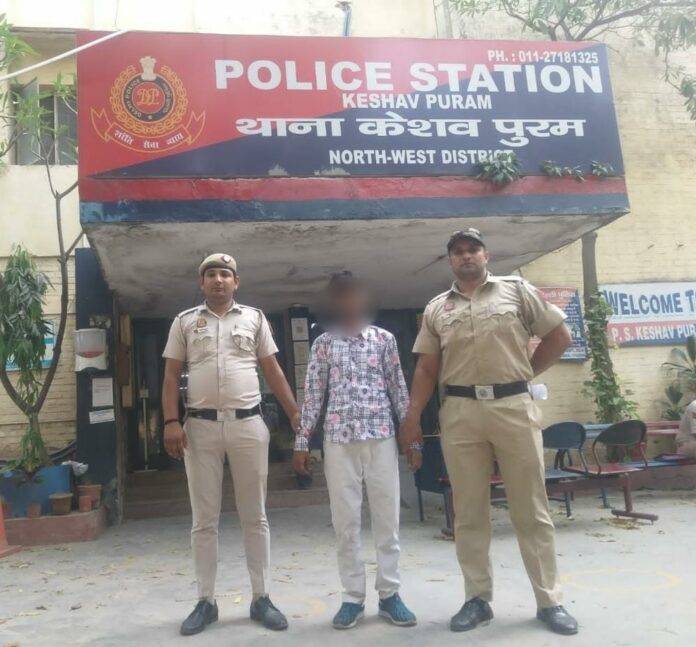 New Delhi: Under Operation Sajag, a continuing drive of the North-West District for containment of crime & criminals and to dominate the streets so as to reduce street crimes as well as to instill confidence & sense of security among citizens, one notorious robber nabbed by staff of PS Keshav Puram.

Under this drive, alert patrolling staff and special pickets were deployed for intensive checking and during this exercise, a major breakthrough was achieved whereby staff of PS Keshav Puram nabbed one notorious robber and recovered 01 country made pistol alongwith one live cartridge & 01 stolen scooty from his possession. Accused is a habitual & active criminal (BC of PS Bharat Nagar), previously found involved in 09 cases of robbery, theft & Arms Act.

On 09.04.2022, HC Kamal and Ct. Omparkash of PS Keshav Puram were on vehicle checking duty in the area of PS Keshav Puram when they received a secret information that one person would come near foot-over bridge, Keshav puram, Delhi with a country made pistol and stolen scooty. Immediately, under the close supervision of Insp. Sanjay Singh Rawat, SHO/ PS Keshav Puram, police staff positioned at the location and on pointing by the informer, apprehended one person on a scooty, by displaying keen sense of alertness & swift response. He was identified as Imtiyaz @ Laddan S/o Riyazuddin R/o JJ colony, Wazirpur, Delhi (Age 26 yrs). During his cursory search, 01 country made pistol alongwith one live cartridge was recovered from his possession. On verification of recovered scooty no. DL6S AU 6189, it was found stolen vide e-FIR No.007879/2022 u/s 379 IPC PS Gulabi Bagh.

During his sustained interrogation, he disclosed that he was roaming in the area and looking for easy targets to commit robbery or snatching so as to earn easy money & to fulfill his drug addiction. He is a habitual & active criminal (BC of PS Bharat Nagar), previously found involved in 09 cases of robbery, theft & Arms Act.

Further efforts are being made to trace his possible involvements in other cases also.

Google will invest 75 thousand crores to promote digitization in India