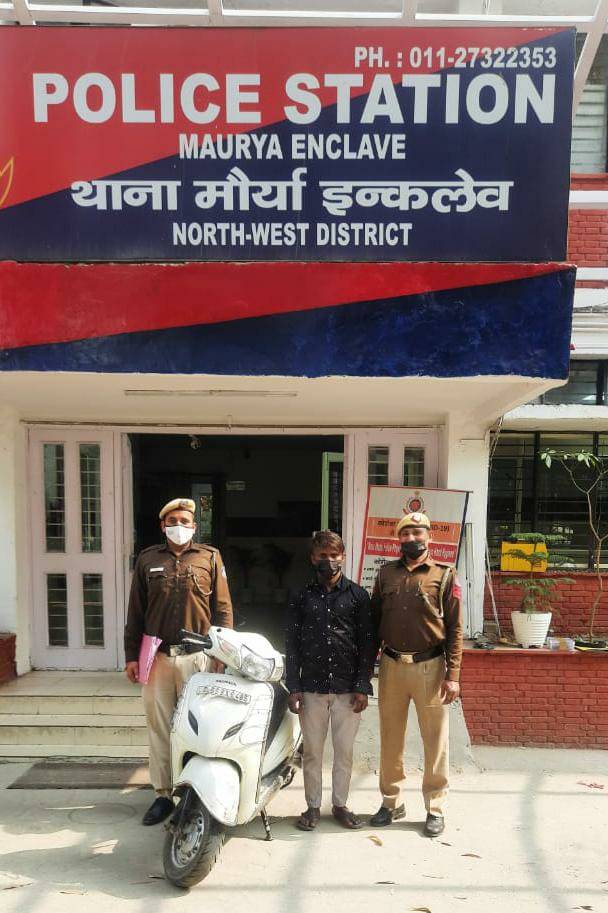 Brief Facts & Incident Details:-
On intervening night of 23/24-02-22 Const. Bhagat & const Manjeet of PS Mahendra Park were performing patrolling duty in New Sabzi Mandi area. When they reached near Bala ji Mandir service road, they noticed two scooty riders, who tried to flee away from there on seeing police staff, but staff chased them and nabbed them. On enquiry, one of them found out to be a CCL and another identified as Rehan s/o Idris r/o N-39/D-34 Bhadola jhuggi Delhi (age 22 yrs). On frisking, one button actuated knife was recovered from the possession of Rehan and on verification of Scooty bearing no DL1S AD 3158, it was found stolen from PS Mahendra Park vide eFIR No. 04327/22 u/s 379 IPC. Also it was found that Rehan was wanted in 04 cases of robbery of PS Mahendra Park in which co-accused had already been arrested with recovery. Accordingly, a case FIR No. 376/22 u/s 25/54/59 Arms Act was registered in PS Mahendera Park and investigation was taken up. During investigation, Rehan and CCL disclosed that they had stolen one more scooty and one e-rickshaw from the area of Mahendra Park and they had dumped the scooty in Jahangirpuri 6-7 days back which was recovered earlier. Rehan was arrested in 04 cases of robbery and CCL was apprehended accordingly.

On 24.02.22 at about 08:45pm, Ct Sunil of PS Maurya Enclave while performing patrolling duty near main gate MD block, apprenhended a person namely, Rajesh s/o Ramesh r/o I-Block, Jhuggi Wazirpur J.J.Colony, Bharat Nagar Delhi, (Age 22 years) with one stolen Scooty No DL-5SBX- 2485. The scooty was found to be stolen vide eFIR No 0003525/22 u/s 379 IPC PS Keshav Puram. In this regard, legal action is being taken. The accused has previous involvement of vehicle theft cases and his possible involvement in other cases is also being verified.

In the intervening night 24/25-02-22 at about 01AM, Ct Dharmender and Ct Sandeep of PS Maurya Enclave while performing patrolling duty near District Park apprehended a suspicious person namely, Mohit Sapra s/o Devender Sapra /o B-4/13 Miyanwali Nagar, near Peera Garhi, (age- 29 years). During his cursoury search, a country made pistol alongwith two live cartridges was recovered from his possession. Accordingly, a case FIR No. 271/22 u/s 25/54/59 Arms Act was registered in PS Maurya Enclave. The further investigation of the case is on progress.

Further investigation of the cases is in progress.