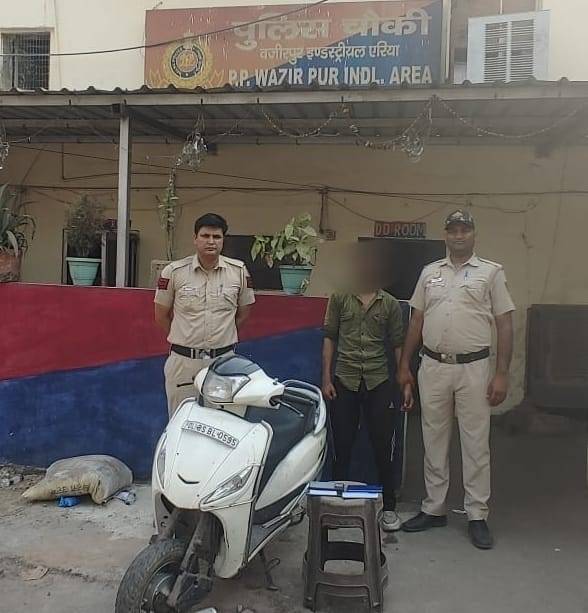 Under this drive, alert patrolling staff and special pickets were deployed for intensive checking and during this exercise, a major breakthrough was achieved whereby staff of PS Ashok Vihar nabbed one notorious auto-lifter and recovered 01 stolen scooty & 04 snatched/stolen mobile phones from his possession. Accused is a habitual & active criminal, previously found involved in 04 cases of auto-lifting & theft.

On 30.03.2022, HC Robin Singh & Ct. Ajay of PP WPIA PS Ashok Vihar were patrolling in the area of Wazirpur Industrial Area, under the close supervision of SI Sonu, IC PP WPIA and overall supervision of SHO/ Ashok Vihar. When they reached B block Raja Park, WPIA, they noticed one suspicious person on a scooty roaming in the area. When police staff signaled him to stop, he immediately took u-turn and tried to flee away from spot, but the active & alert staff overpowered him, by displaying keen sense of alertness & swift response. He was identified as Mohit @ badshah S/o Radhey Shyam R/o Jhuggi Wazirpur Industrial Area, Delhi (Age 23 Yrs). During his cursory search, 01 mobile phone was recovered from his possession. On verification of scooty, it was found stolen vide e-FIR No.007977/2022 u/s 379 IPC PS Nangloi & mobile phone was found stolen vide e-FIR No. 000238/22 U/s 379 IPC PS Ashok Vihar.

During his sustained interrogation, 03 mobile phones were recovered on his instance. Further efforts are being made to link the recovered mobile phones with the concerned cases. Accused found to be a habitual & active criminal, previously found involved in 04 cases of auto-lifting auto-lifting & theft. Further efforts are being made to trace their possible involvements in other cases also.