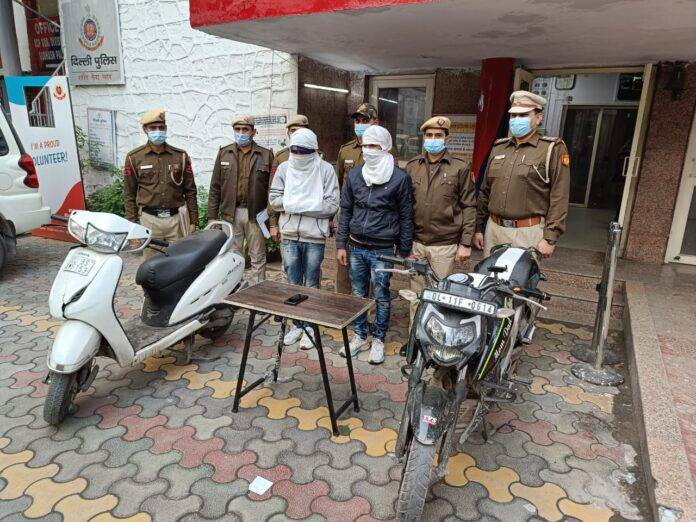 On 18.01.22, complainant Deepika Sharma (age-35 yrs) reported at PS Subhash Place that she works in NSP Complex and when she hired an e-rickshaw at NSP Bus stand, after her office at around 6:45 PM, two boys suddenly came on the black colour bike & snatched her mobile phone and fled away.

Under Operation Sajag, a continuing drive of North-West District for containment of crime & criminals and to dominate the streets so as to reduce street crimes as well as to instill confidence & sense of security among citizens, alert patrolling staff and special pickets were deployed for intensive checking. During this exercise, a trap was laid down near TV Tower, Pitampura to keep close vigil over suspicious persons. A major breakthrough was achieved whereby team of PS Subhash Place led by Inspr. Partap Singh comprising of SI Bijendra, HC Suresh, Ct. Dravesh, Ct. Devendra & Ct. Kunwarpal noticed two suspicious persons on a black colour bike roaming in the area. On suspicion, the team immediately swung into action and signaled them to stop. Upon this, the suspects immediately took u-turn and tried to flee away. However, the police staff acted swiftly and was able to nab them by displaying keen sense of alertness & courage. On enquiry, they were identified as (1) Umesh S/o Vijay Sjngh R/o Pitampura, Delhi (Age-24 yrs) and (2) Anil Kumar S/o Mahendra Singh R/o Vijay Vihar Delhi (Age-25 yrs). During their cursory search, 01 Mobile Phone was recovered from their possession. One scooty was also recovered from them which was found stolen vide eFIR No. 00684/22 PS Maurya Enclave.

During their sustained interrogation, they disclosed that about an hour ago, they snatched the recovered mobile phone from a lady in an e-rickshaw at NSP Bus Stand in the instant snatching case. And they were further looking for another target for committing snatchings in the area. Both the accused are found to be habitual criminals & active snatchers (one is BC of PS Vijay Vihar), previously found involved in several cases of snatching, theft & arms act.

Further efforts are being to trace their possible involvements in other cases also.