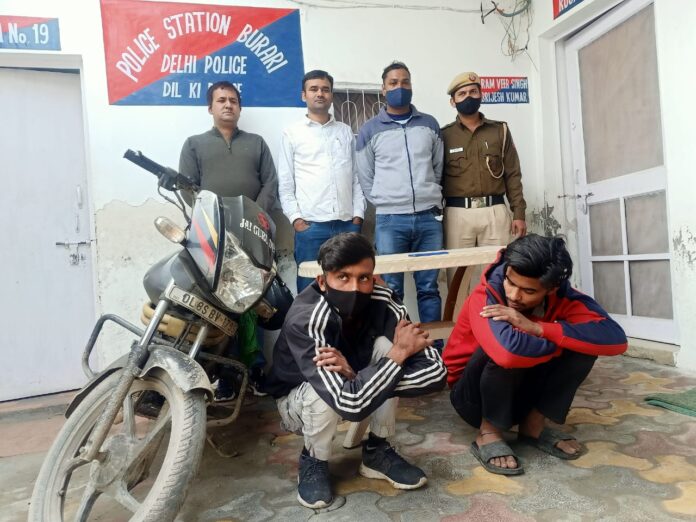 New Delhi: 02 budding snatchers first got installed accessories in their motorcycle and later escaped by snatching a mobile phone from one of the employees in the workshop.

More than 100 CCTV footage were checked but beyond Mukandpur, they didn’t find any clue.

On the basis of the registration number of the motorcycle, both budding snatchers were nabbed from Jahangir puri.

They had taken the motorcycle from one known on a request basis and were committing a crime.

The snatched mobile phone and motorcycle used in the commission of crime recovered.

The complainant Shri Pawan Kumar r/o Kamal Vihar, Kamaalpur Burari Delhi, age-19 years reported in his complaint that he works in an Auto Mechanic Shop at Himgiri Enclave, Burari, Delhi. On 04.01.2022 at about 04:00 PM, two motorcycle-borne persons came at the shop for getting some accessories and paid the bill. After leaving the shop, they again came back and one of them snatched his mobile phone make Redmi and fled away from the spot. Accordingly, a case vide FIR No. 18/22, dated 04.01.2022, u/s 356/379/34 IPC was registered at PS Burari and investigation was taken up.

The team conducted a technical investigation and more than 100 CCTV cameras installed in the vicinity of the place of incident and the possible routes taken by the culprits were checked and analysed. On the basis of detailed analysis of available CCTV footages, the team reached up to Mukandpur, Delhi but after that they didn’t find any clue about the movement, however, the team got succeeded in developing and identifying the number plate of the motorcycle.

Ultimately, continuous and sustained efforts of the police team bore fruits and the dedicated team got succeeded in apprehending both accused persons involved in the commission of snatching on 12.01.2022 from Jahangirpuri, Delhi along with the motorcycle used in commission of crime.

Both the accused persons were identified as Chaman age-21 years and Sunny, age-21 years resident of Shamli, UP. On their personal search, the snatched mobile phone make Redmi-9 in present case was recovered

During interrogation, both accused persons confessed about committing snatching with the complainant on 04.01.2022. They disclosed that after getting accessories from the shop and going back, they noticed the victim came out on road and started talking to someone. So, after going to some distance, they took U-turn and snatched the mobile phone of the victim and escaped from the spot.

Both the accused persons Chaman and Sunny are relatives. They are school dropout and have studied up to 8th & 9th standard respectively. They are permanent resident of Shamli, Uttar Pradesh and Chaman has been living on a rented accommodation from around 1 & ½ month. Sunny visited him just one week ago. Both are budding criminal and alcoholic.

Facebook
Twitter
Pinterest
WhatsApp
Previous articleLess than 25,000 cases are likely to be reported in Delhi, 75% of patients who die of Kovid are not vaccinated: Jain
Next articleShariya Manzoor a Callisthenic Athlete from South Kashmir
Team Janmat Samachar

Less than 25,000 cases are likely to be reported in Delhi, 75% of patients who die of Kovid are not vaccinated: Jain

Social media platforms will not be able to do arbitrary, government releases new guidelines