Three desperate criminals roaming on a stolen motorcycle to commit crime, nabbed by the team of aats/North District. 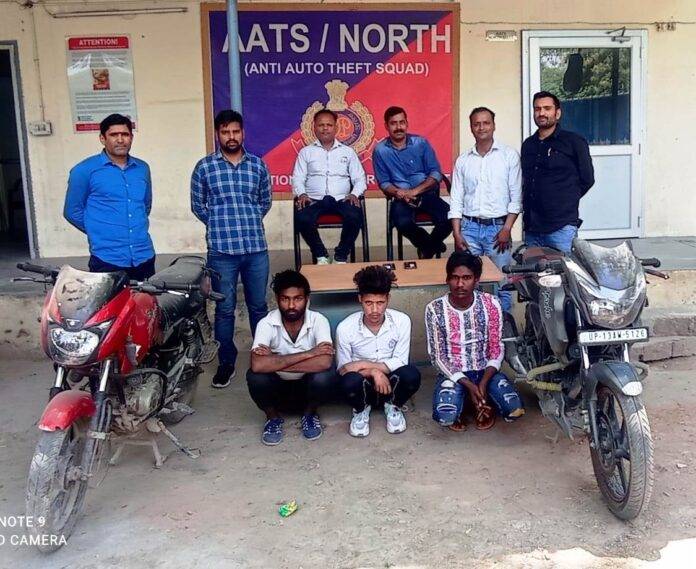 New Delhi:The team of AATS/North District has been directed to work on the wanted criminals especially Robbers/Snatchers/Burglars and criminals involved in street crime. The team collected details of wanted criminals of North District and deployed secret informers to nab them. Moreover, AATS team has been working relentlessly and developing information about the criminals active in the area and they also used to patrol randomly in the area during odd hours to keep a check on their illegal activities.

On 04.04.2022, ASI Dinesh of AATS/North District received secret information through his reliable sources that three notorious criminals involved in many criminal cases are roaming in the area of Burari on a stolen motorcycle to commit crime. If a raid be conducted well in time, they might be apprehended. Immediately, the information was passed to the senior officers.

Working on the secret information and as per the directions of senior officers, the above said team instantly rushed to the place of information and laid a strategic trap during night hours. The dedicated efforts of the police team bore efforts when at about 09:30 PM, they noticed three persons without helmets riding a Pulsar motorcycle at Nala, Pump House Burari, Delhi. On the indication of secret informer, the police team signaled the suspects to stop for checking and enquiry, but instead of stopping they took U-turn and tried to escape from the spot. However, the alert and valor police team instantly swung into action and succeeded in apprehending all the three suspects along with the motorcycle.

Upon their cursory search, 02 mobile phones make Redmi and OnePlus was recovered from their possession. On checking in police record, the recovered motorcycle, make Bajaj Pulsar being used by the offenders was found as stolen vide E-FIR No. 004593/22 dated 21.02.22, u/s 379 IPC, PS Burari, Delhi.

During interrogation, the accused persons disclosed that they stole the recovered motorcycle, make Bajaj Pulsar from Burari area about one year ago and they were using the same in committing crime. On verification, a case vide E-FIR No. 004593/22 dated 21.02.22, u/s 379 IPC was found registered at PS Burari on the complaint of Shri Yogender Kumar, r/o Himgiri Appartments, Burari, Delhi.

During interrogation, the accused Sunny Taak revealed that he stole the recovered mobile phone, make Redmi from a person in the area of PS Bara Hindu Rao about 07-08 months ago. On checking in police record, a case vide E-FIR No. 000286/21 dated 24.07.21, u/s 379 IPC was found registered at PS Bara Hindu Rao on the complaint of Mohd. Javed, r/o Sheesh Mehal, Azaad Market, Delhi.

Further, the accused Bhupender @ Poly disclosed that he stole the recovered mobile phone, make One Plus about 06 months ago from a lady near a clinic in Burari area. In this regard, a case vide E-FIR No. 00965/21 dated 10.10.21, u/s 379 IPC was found registered at PS Burari on the complaint of the lady r/o 100 Foota Road, near Rani Public School, Burari.

During interrogation, the accused persons confessed about their involvement in many other cases. Later at their instance, one more motorcycle, make TVS Apache was recovered, which was found parked at the backside of the wall of Burari Authority. In this regard, a case vide E-FIR No. 008684/22, dated 03.04.22, u/s 379 IPC was found registered at PS Bhalaswa Dairy on the complaint of Shri Saurav Kumar, r/o Mukundpur, Part-II, Delhi.

All the accused persons are school dropout and have studied up to 5th, 9th and 4th standard respectively. All are unemployed and drug addicts. They commit crime to earn easy money and to fulfill their lust of drugs.

Four cases of M.V. Theft and Mobile Theft registered at PSs Burari, Bhalaswa Dairy and Bara Hindu Rao worked out with their arrest.

Further investigation of the case is in progress and efforts are being made to affect more recovery.