Home Crime An armed robbery with an old age lady at her residence solved...
Crime 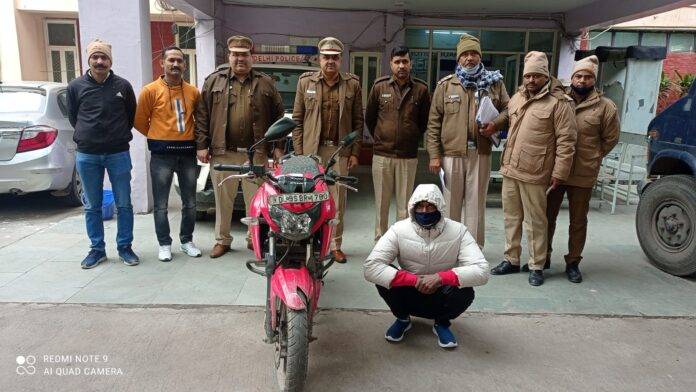 New Delhi: In view of a sensational armed robbery took place in the area of PS Sarai Rohilla at DDA Flats, Gulabi Bagh, Delhi, the police officials of PS Sarai Rohilla, Delhi took it as a challenge and worked out the case within a noticeable time of 24 hours by doing conspicuous good & hard work and displaying a rare example of professional competence and investigating skills.  They not only arrested the accused involved in the commission of armed robbery, but also recovered the motorcycle and weapon used in the commission of crime.

On 22.01.2022 at about 06:00 PM, a PCR call was received at Police Station Sarai Rohilla that a person has escaped after stabbing a 60 yrs old age lady. SI Harkesh Kumar of PS Sarai Rohilla reached the spot and the victim was shifted to nearby NKS Hospital.

The injured/victim was declared fit for statement by the Doctors, but due to pain she was not in position to give her statement. However, she told that while she was alone at her house, one boy aged about 30 years, wearing yellow colour jacket and a muffled face, intruded in her house and took out a knife. He demanded money under the threat of life. When she raised alarm and tried to run-out of her house, the accused stabbed her twice in her stomach, shoulder and robbed her mobile phone.

The above said police team conducted technical investigation and scrutinized the CCTV footage of the cameras installed at the house of the victim and other cameras installed in the vicinity. The thorough investigation helped in tracing the registration number of the motorcycle used in commission of  crime. The police team obtained the ownership of the above motorcycle, which was found registered in the name of a lady r/o Nawada Village, Delhi. The police team visited the given address, but the registered owner of the motorcycle was not found residing there.

The police team took a new strategy and obtained the detail of the Challans of the above motorcycle for violation of M.V. Rules and found that one Randhir Singh r/o Baljeet Nagar, Delhi was challaned by Delhi Traffic Police on 24.12.2021, while driving this motorcycle without helmet. Immediately, the police team visited the address and it revealed that the motorcycle was being used by Prem Kumar @ Kala Bhanda @ Randhir Singh.

It further revealed that the suspect was residing at the accommodation as a tenant and has left the same about 4/5 years ago. The team didn’t lose heart and conducted one to one enquiry in the locality. The said efforts bore fruits and the police team succeeded in getting the phone number of the wife of the suspect.

Hence, the SDR of the said mobile number was obtained in which the address of the subscriber was given as B-68, Nawada Village, Delhi. The enquiry was made at this address and it was told that the above person had stayed at this address as a tenant and presently he is not residing there.

The dedicated police team with technical assistance found the location of the phone number in village Nawada, Delhi. Immediately, the team reached the village and conducted search of the suspect and succeeded in tracing the suspected motorcycle, which was found parked behind Nawada Metro Station.

During preliminary interrogation, he confessed about his involvement in commission of robbery with the victim in DDA Flat, Gulabi Bagh, Delhi.

He further disclosed that the son of the victim has been working as a wedding planner while the husband of the victim runs a Photo Shop and making photo videos of marriage events. About 10 years ago, the accused Prem Kumar @ Kala Bhanda @ Randhir Singh had worked with the son of victim as DJ operator.

About 3/4 days before the date of incident, the accused visited the shop of the husband on the pretext of booking of photographer for a marriage ceremony and to recce about the family and their movement.

The family resides at the ground floor near a park. On 22.01.2022, the accused waited at the park and in the evening at around 5:30 PM, when the husband went out of the flat and the door was open, he immediately entered the room. He has muffled his face, having hand gloves etc and took the lady on knife point. He threatened her to give all the cash and jewellery in the house, but she raised alarm and he run away with the mobile phone after stabbing the old age lady.

It further disclosed that the accused is a habitual and desperate criminal, who has been previously involved in 10 criminal cases under the heads of Robbery, Burglary, House Theft, Arms Act and Excise Act registered at different PSs of Delhi. He was also convicted in a robbery case of PS Anand Parbat, Delhi registered in 2012.

Further investigation of the case is in progress and efforts are being made to affect more recovery.

New Delhi | A Sikkim Police jawan posted in the national capital on Monday shot dead his senior and two associates. A senior official of the Delhi...
Read more
Crime

A gang of burglars busted with the arrest & apprehension of 06 accused persons including a lady kingpin and 04 ccls by the team...