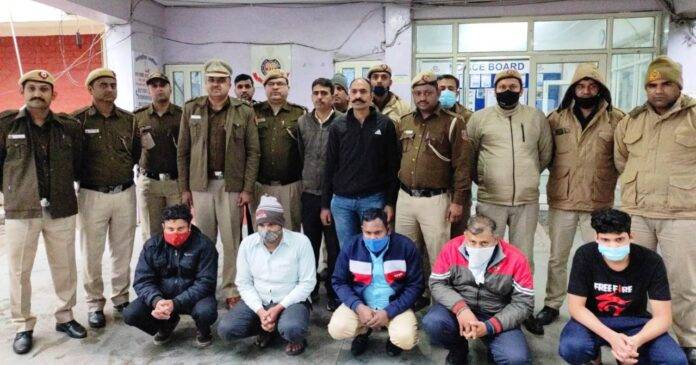 BRIEF FACTS: On 07.01.2022, a PCR call was received in PS Sarai Rohilla that a dead body, wrapped in the bed-sheet and tied with ropes was lying at Tikona Park, Inderlok near temple, Delhi. SI Deepak Lohchab, (I/c PP Inderlok) immediately reached at the spot for investigation. A body of a 20-25 years old male wrapped in a bed-sheet with ropes was found. Prima facie, injury marks were cuts on back of neck and hand of the deceased. On personal search of the deceased, some cash, bundle of Bidis, lighter, one face mask etc were found. However, nothing to determine the identity of deceased was recovered.

Sincere efforts were made to identity the deceased. Later, the deceased was identified by his family member as Abhishek r/o Partap Nagar, Delhi, 20 yrs. Accordingly, a case vide FIR No. 17/22, dated 07.01.2022, u/s 302/201 IPC was registered at PS Sarai Rohilla and investigation was taken up.

During investigation, wife of the diseased was enquired, who stated that on 06.01.2021, she was feeling pain in her stomach so she along with her husband Abhishek (the deceased) left for the nearby clinic, which was found closed so her deceased husband asked her to reach home saying that he would be coming soon but he did not return. It further disclosed that the deceased has criminal history of involvement in about 20 cases of theft/burglary.

The team conducted a technical investigation of the spot of incident as well from the residence of the deceased to find out the movements of the deceased right from his house and get any clue about the incident. During thorough analysis of the CCTV footages, the teams didn’t find any movement of the deceased beyond a Gali at Padam Nagar, Delhi.

The police team members also deployed their local sources to get information about the deceased. It came to notice that the deceased was having some dispute with the accused persons, who had been running a bakery in Padam Nagar, Delhi. Immediately, the police team reached the bakery, where they noticed that the bed-sheets and polythene bags present in the bakery were resembling with the bed-sheets and polythene bags, in which the dead body was found wrapped.

Accordingly, the owner of the bakery shop Afjal Ansari aged 45 years along with his brother Savjal Ansari-aged 38 years (who runs a bakery shop in Khajoori), Rasid Ansari-aged 30 years, Mohd. Abrar-aged 27 years and Mohd. Israfil-aged 20 years were apprehended and interrogated at length. On sustained interrogation, the accused persons confessed about committing murder of the deceased Abhishek, 20 yrs.

One mobile of the deceased Abhishek also recovered from Yamuna River with the help of divers.

During interrogation, the accused persons disclosed that about 1 ½ years ago, they purchased two stolen laptops from the deceased for a sum of Rs. 5,000/-. Thereafter, the deceased (having criminal background) started blackmailing them and extorting money on many occasions under the threat of reporting the purchase of stolen laptops by them to the police. They claimed about being extorted Rs one lacs till that day.

As per the accused persons, the diseased Abhishek again visited their bakery on 06.01.2022 having slit arms and demanded Rs 20,000/- from them. Upon this, the accused persons decided to eliminate him. Accordingly, they took him to the adjoining room and initially tried to convince him that they have no money but the deceased was adamant didn’t listen to them. Hence, they overpowered and strangulated him. Finally, they wrapped the dead-body in a bed-sheet, packed the same and took it to Tikona Park, Inderlok near temple on a Scooter and threw the dead body.

The accused persons Afjal Ansari and Savjal Ansari (both are real brothers), Rasid Ansari and Mohd. Israfil committed the murder of Abhishek and after committing murder, accused Mohd. Abrar assisted them in causing disappearance of evidence.

All the accused persons are permanent r/o District Jamui, Bihar.

Robinson Zabethananda Narayan: Yoga is the utmost key for our health