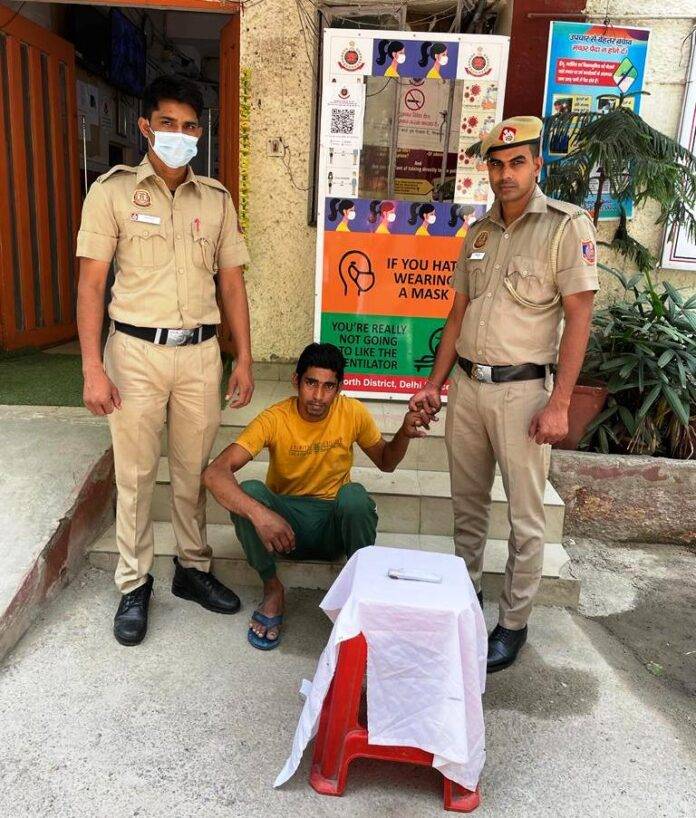 New Delhi: Keeping in view, the regular directions of senior officers regarding checking the menace of criminals and to curb street crime, police presence has been increased in the beat area of PS Gulabi Bagh by regular area patrolling and conducting random picket checking during odd hours to surprise the criminals. PS Gulabi Bagh staff has also been directed for maximum use of ROKO-TOKO strategy of Delhi Police.

On 22.04.2022, a dedicated police team led by SI Praveen Sharma, (In-charge PP Andha Mughal), comprising of ASI Ashok Kumar, Ct Rikhil and Ct Vijay were on patrolling in the area, under the close supervision of Inspr. Samar Singh, SHO/PS Gulbi Bagh and guidance of Shri Pankaj Sharma, ACP/Sarai Rohilla. The above said police team was working relentlessly to curb the incidents of snatching, robbery and street crime in the area in pursuance of directions issued by the senior officers.

During special patrolling enforced by PS Gulabi Bagh early in the morning at about 07:00 AM, the above said police team reached near Pratap Nagar Metro Station, Old Rohtak Road. In the meantime, they noticed a suspect person coming from Y-Point, Kishan Ganj towards Old Rohtak Road, who on seeing the police team in uniform, immediately took U-turn and tried to escape hurriedly. However, the police team instantly swung into action and showed great sense of alertness and they chased the suspect. Ultimately, the police team succeeded in apprehending him strategically after a short chase.

On enquiry about his presence, he tried to dodge the police and failed to give satisfactory reply to the police team. Upon his cursory search, a button actuated knife was recovered from his possession. The accused was identified as Ankush @ Jugnu, age-35 years.

During interrogation, the accused Ankush @ Jugnu, age-35 years disclosed that he purchased the recovered knife from one of acquainted for Rs 250/- about 03 days ago who met him in the area of Kishan Ganj and he was using the recovered button actuated knife for committing criminal activities and to terrorise the gullible people.

On sustained interrogation, it revealed that the accused Ankush @ Jugnu is a habitual criminal with the history of involvements in 14 cases under the heads of Robbery, Snatching, NDPS Act and Arms Act registered in Police Stations Gulabi Bagh and Sarai Roghilla. He is an active BC of PS Sarai Rohilla and released from jail about a week ago and he again indulged in committing criminal activities.

The accused Ankush @ Jugnu is a school dropout and has studied up to 4th standard only and he is also a drug addict. He used to work as labourer and living with his parents, wife and three children. Due to insufficient income from his task, he began to commit crime to earn easy money and to fulfil his lust of drug.