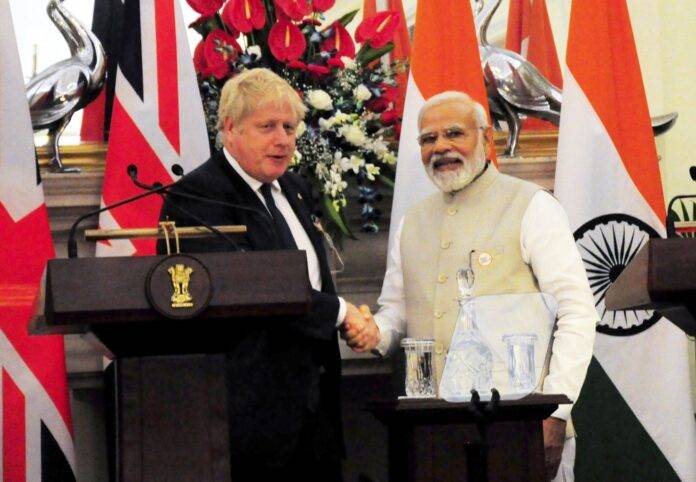 New Delhi | Prime Minister Narendra Modi on Friday congratulated British Prime Minister Boris Johnson on the successful conduct of COP 26 in Glasgow in 2021. During the bilateral talks held here at Hyderabad House, the two leaders reiterated their commitment to ambitious climate action to achieve the goals of the Paris Agreement and implement the Glasgow Climate Agreement.

The Ministry of External Affairs of India said here, “They are looking forward to enhancing cooperation on rapid deployment of clean energy including offshore wind power and green hydrogen and to promote cooperation on Global Green Grid-One Sun One World One Grid Initiative (OSOWOG) under ISA and IRIS platform under CDRI”. Agreed to work together for the early operations of the U.K., which were jointly launched by India and the UK at COP26.”

Through the Global Innovation Partnership, India and the UK have agreed to co-finance up to £75 million (British) to support the transfer and scale of climate-smart sustainable innovations to third countries.

The novel GIP fund created under this partnership will also aim to raise an additional £100 million from the market to support Indian innovations.

During the talks, Modi also said that India has shown its commitment to fulfilling the commitments made at COP-26 in Glasgow and decided to further enhance the partnership for climate and energy.

“I invite the UK to join India’s National Hydrogen Mission and express my gratitude for establishing a strategic technical dialogue between the two countries,” Modi said.

The two Prime Ministers also exchanged views on two MoUs on the implementation of the India-UK Global Innovation Partnership and the Global Center for Nuclear Energy Partnership (GCNEP).

He invited Johnson to India in 2023 for the G20 summit chaired by India, while Johnson reiterated his invitation to Modi to visit the UK and he accepted the British Prime Minister’s invitation.