PM Modi talks to the Prime Minister of Denmark, both the leaders reviewed the progress of Green Strategic Partnership 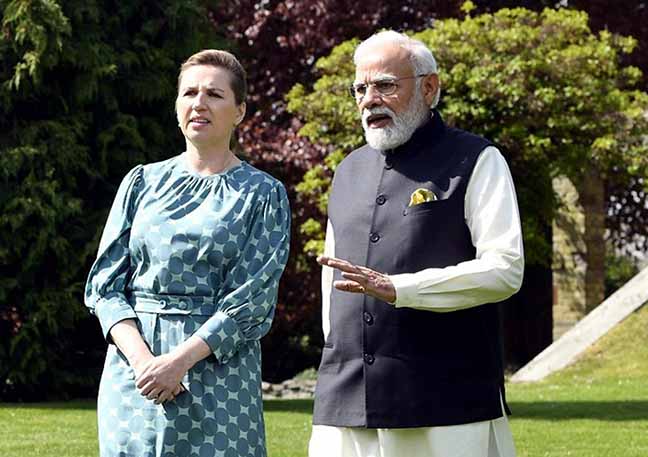 New Delhi | Prime Minister Narendra Modi and his Danish counterpart Mette Fredriksson, who are on a three-nation Europe visit, on Tuesday discussed a range of issues, including regional and global affairs. An official statement said the two leaders held one-on-one talks, which were followed by delegation-level talks.

“The two leaders appreciated the growing people-to-people ties between the two countries and welcomed the Declaration of Intent on the Migration and Mobility Partnership,” the statement added.

According to the statement, the two prime ministers expressed satisfaction at the progress made in various sectors since the visit of the Danish Prime Minister to India in October 2021, particularly in the areas of renewable energy, health, shipping and water.

The two leaders shared convergence of interests on the importance of climate action, green development and energy diversification.

According to the statement, “Freedom of energy supply based on fossil fuels is important in this regard as well as in security policy. Thus, the two leaders agreed to further strengthen their cooperation within the renewable energy sector and establish a partnership between India and Denmark.” Welcoming the work on a comprehensive energy policy dialogue, including particularly strengthening cooperation on cross-sector energy planning with a focus on green hydrogen, the integration of renewable energy, energy storage and decarbonisation.”

In this regard, the two Prime Ministers welcomed discussions towards energy policy dialogue at the ministerial level.

The two leaders also noted the progress made in the work of the International Solar Alliance (ISA).

They emphasized the importance of the India-EU Strategic Partnership and reaffirmed their commitment to further strengthen this partnership. The two leaders appreciated the progress made in the resumption of negotiations on the India-EU trade, investment and Geographical Indication Agreements and called for a balanced, ambitious, comprehensive and mutually beneficial approach and an early and simultaneous conclusion. Did. They welcomed the launch of the Trade and Technology Council between the European Union and India, underlining the importance of deeper, strategic cooperation on cross-cutting issues related to trade, reliable technology and security.

The two leaders also recalled the India-EU connectivity partnership and agreed to support efforts towards its early implementation.

They reaffirmed their commitment to a rules-based international order and a strong and reformed multilateral system.