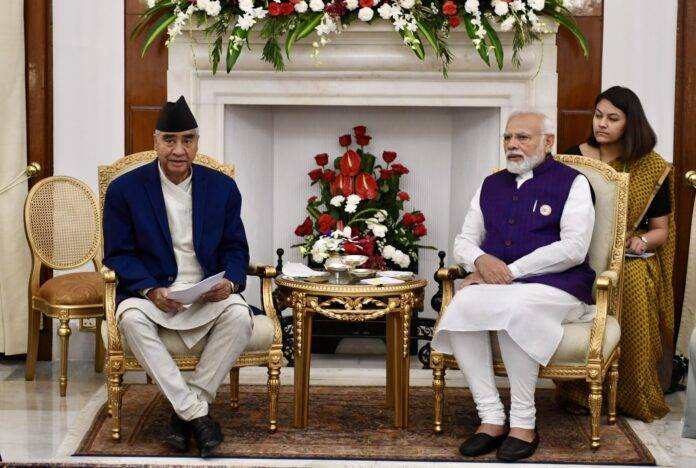 New Delhi| India and Nepal on Saturday unveiled a joint vision of bilateral cooperation in the power sector and signed a few MoUs in this regard. Indian Foreign Secretary Harsh Vardhan Shringla said that the Indian Oil Corporation and Nepal Oil Corporation have signed two MoUs during the delegates level meeting at Hyderabad House on Saturday.

The delegation-level meeting was led by Prime Minister Narendra Modi and his Nepal counterpart Sher Bahadur Deuba. The Prime Minister of Nepal is on a three-day visit to India.

The MoU has been signed for the renewal of the supply of petroleum products for a period of five years and sharing of technical expertise.

The Secretary said that a joint statement for the electricity trade was simultaneously unveiled.

Modi also told Deuba that his power export proposals have been approved and will contribute to Nepal’s economic prosperity. “There was also a new commitment by both sides to go ahead with the Pancheshwar project,” Shringla said during the press conference on the meeting of the two leaders.

The two leaders reaffirmed their commitment to geography, history, culture, and commerce and to further deepening ties and bonds between the two countries.

In this context, the two Prime Ministers noted the positive developments in each other’s power sectors. India congratulated Nepal for significant progress in the power sector, including becoming a near-power surplus country.

He appreciated India’s contribution in developing Nepal’s power sector through capacity building and direct support to infrastructure projects related to generation and transmission.

The two Prime Ministers agreed that Nepal would have mutually beneficial cooperation in the power sector, including joint development of power generation projects, development of cross-border transmission infrastructure, and bi-directional power trade with fair access to electricity markets in both countries on a mutually beneficial basis. Opportunities to expand and further strengthen bilateral cooperation benefiting from unprecedented market demands and applicable domestic regulations of each country, coordinated operation of the national grid and sharing of the latest operational information, technology and information to further strengthen institutional cooperation There are opportunities.

This includes expanding such cooperation to include its allies under the BBIN framework, subject to mutually agreed terms and conditions between all parties.

Indian investments in Nepal’s renewable energy sector, particularly hydropower, will benefit both countries by strengthening employment-generating economies, increasing export earnings and contributing to the further development of industrial and financial capabilities, and other benefits, the statement said. is likely to be mutually agreed upon to share.

Nepal invited Indian companies to invest in the development, construction and operation of viable renewable energy projects, including the hydropower sector in Nepal, including storage-type projects, through a mutually beneficial partnership.

Recalling the discussions held during the earlier high-level visits on the Pancheshwar Multipurpose Project during the State Visit of the Prime Minister of Nepal to India in August 2017, and acknowledging the immense benefits the project brings to the people of both countries, both Prime Ministers directed their respective officials to expedite bilateral discussions towards early finalization of the DPR of the project.

The two Prime Ministers agreed to prioritize the accelerated pace of projects and initiatives based on this joint approach. They agreed to continue to support each other’s national development and prosperity guided by mutual respect and equality.

The Foreign Secretary said that the launch of RuPay in Nepal is an important step in enhancing the financial ties between the two countries. “This is expected to facilitate bilateral tourism flows and strengthen people-to-people ties,” Shringla said.