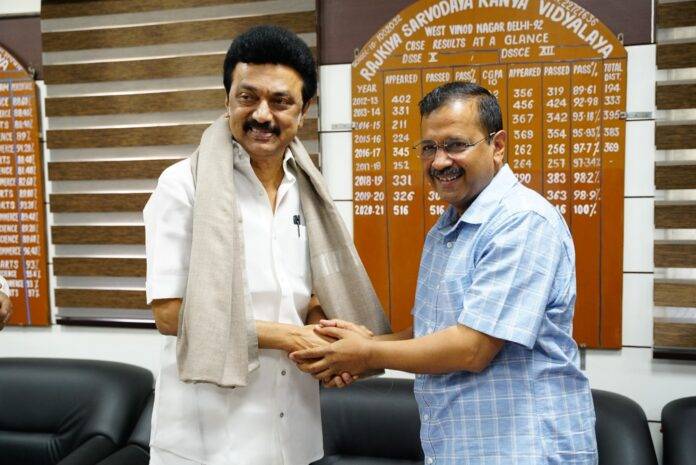 NEW DELHI: Tamil Nadu Chief Minister MK Stalin heaped praises of the Kejriwal Government’s schools and Mohalla Clinics on his visit to Delhi today. He expressed his willingness to develop a model school in his state on the lines of Delhi and invited Chief Minister Shri Arvind Kejriwal to see it. The Delhi CM accepted the invitation of visiting Tamil Nadu and said that “It will be an honour for me to attend Thiru Stalin”. Tamil Nadu CM Thiru MK Stalin stated — I visited Delhi’s government schools and Mohalla Clinics with CM Arvind Kejriwal and Dy CM Manish Sisodia. We will develop a world-class model school in Chennai; I am inviting CM Arvind Kejriwal to it in advance. On this occasion, CM Shri Arvind Kejriwal said — Only education can help build a better society and an empowered nation; come let’s bring an education revolution together. The Delhi Government would love to share their experiences with the Tamil Nadu Government and will learn from their works too. This country can only progress when we learn from each other’s ideas. All states need to work together to help the country walk faster towards development. Deputy CM Shri Manish Siaodia said that CM Stalin’s Delhi visit would motivate both states to bring reform in their education system. He added that If we work together to improve our education system by learning from each other then we can bring an unprecedented transformation in the country.
Delhi Chief Minister Shri Arvind Kejriwal and Deputy CM Shri Manish Sisodia hosted Tamil Nadu CM Thiru MK Stalin and Education Minister Thiru Ambil Mahesh Poyyamozhi and told them the full story of the revolutionary change that has taken place in Delhi Government schools. These government schools in Delhi, once called ‘tent schools’, are today beating the private schools in terms of infrastructure, building and modern facilities. The results of Board exam shows that the government schools of Delhi have left behind the private schools. The Tamil Nadu CM visited the classrooms and took note of the modern facilities and splendid buildings and got a glimpse of the growing confidence in the children of Delhi’s government schools.  Principal Secretary (Education) H Rajesh Prasad, Education Director Himanshu Gupta, Deputy CM’s Secretary C. Arvind and Rajkiya Sarvodaya Kanya Vidyalaya Principal Jyotsna Minj and other dignitaries were present on the occasion. 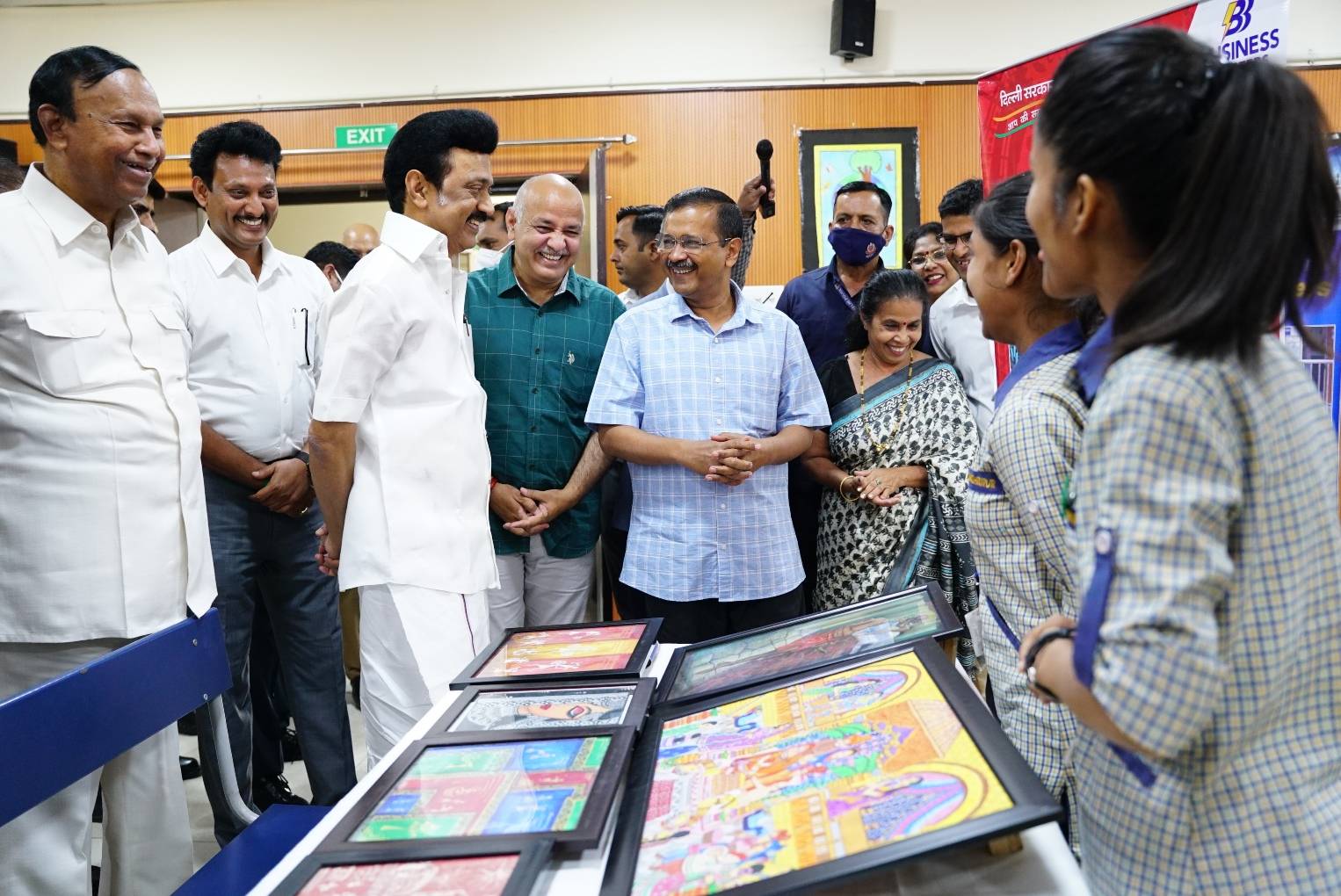 Tamil Nadu Chief Minister Thiru MK Stalin reached Rajkiya Sarvodaya Bal Vidyalaya in Delhi at around 11.30 am today, where he was received by CM Shri Arvind Kejriwal and Deputy CM Shri Manish Sisodia.  During this event, school children presented flowers to the Tamil Nadu Chief Minister to welcome him upon his arrival at the school.  CM M K Stalin presented a shawl and books to CM Shri Arvind Kejriwal and Deputy CM Manish Sisodia. The Delhi CM also felicitated his Tamil Nadu counterpart and the ministers accompanying him were welcomed by presenting them with shawls and expressed their happiness on coming to Delhi’s government schools. CM M K Stalin saw the school building thoroughly and attended the Happiness class and talked to the children in it. He also met the children of Deshbhakti class and got to know their experience.  A team from the Business Blaster program told him that they started with seed money and earned Rs 1.50 lakh.  They have given employment to 25 local residents and some people from Tamil Nadu and Karnataka have also been given employment as well. Thiru Stalin was very impressed by the self-confidence that the children had in them. He then saw the swimming pool built in the school and also talked to the children taking training there along with their coach. After this visit, CM Stalin came to see the Aam Aadmi Mohalla Clinic. He talked to the patients and doctors who came to the clinic and got to know about the facilities. 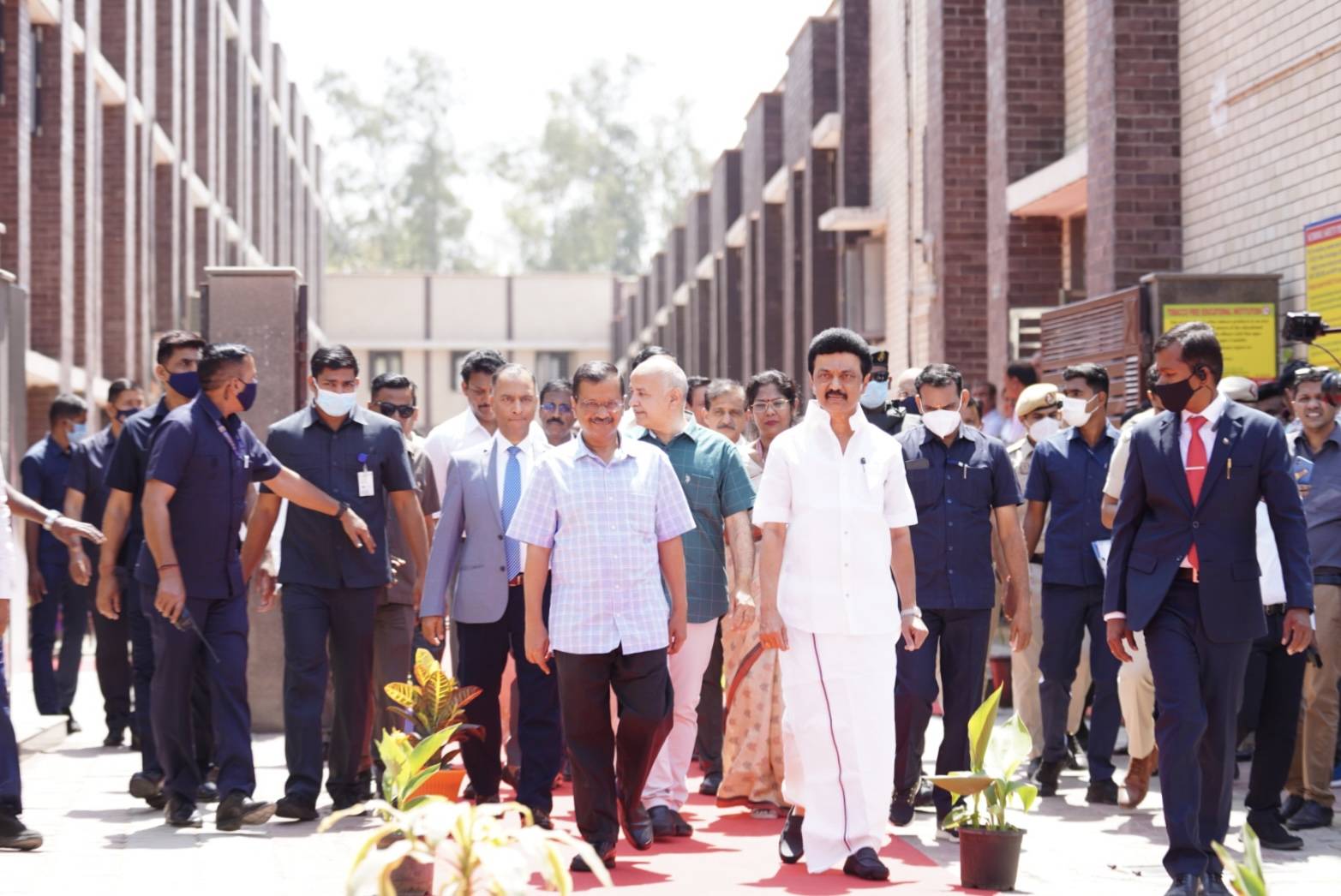