Home National The new government of Tamil Nadu will be inclusive and public: Stalin
NationalPolitics

The new government of Tamil Nadu will be inclusive and public: Stalin 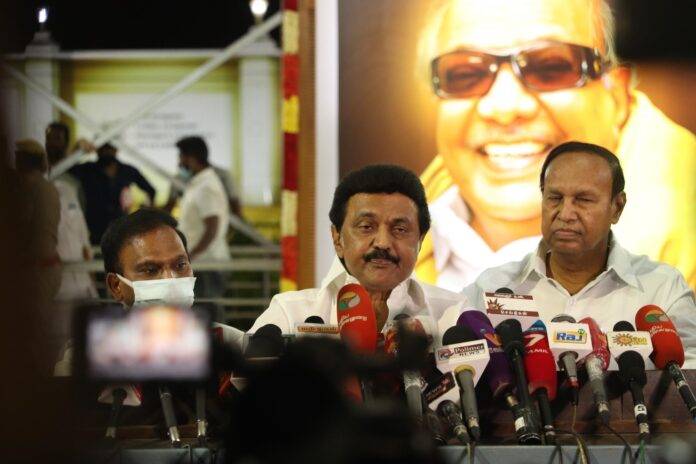 Chennai: Tamil Nadu Chief Minister M.K. Stalin has said that his government will be an inclusive and common people government. In a letter to the party cadres, he has called for working with the cadres of other political parties for the overall development of the state.

He called upon the party workers to forget the bitter election campaign and asked them to unite with the workers of other parties for the welfare of the people.

Stalin said in his letter, this government will focus on the development of the state of Tamil Nadu on all fronts to fulfill the aspirations of those who had missed the last ten years. Instead of cursing the darkness, it would be better to light a lamp and instead of complaining about summer we prepare to welcome spring. ”

Stalin’s statement also appears to be a message for the leaders of other political parties including the opposition AIADMK and BJP and he seems to be reaching out to other parties for the development of the state.

Stalin also mentioned in his letter to the cadres that he found the post of Chief Minister as a responsibility rather than a post and said that he would sit on the throne chair best for him based on the mandate of the people.

He also called upon the people of Tamil Nadu to extend their full support in the fight against Covid.

Shri C. Rajeev, political analyst and director at the Center for Policy and Development Studies, said, “Stalin is reaching out to other political parties and it is a welcome sign indeed.” The Chief Minister has a lot to work with and the rest of the country like Tamil Nadu is facing a Covid epidemic. He is expected to take it forward in the coming days for the total and overall development of Tamil Nadu.

Congress is more concerned about BJP than itself: PM

NEW DELHI: In the expansion of the Union Cabinet, Hardeep Puri got the Petroleum Ministry and Meenakshi Lekhi became the Minister of State for...
Read more

4 Naxalites killed in police encounter in Bihar, many weapons recovered