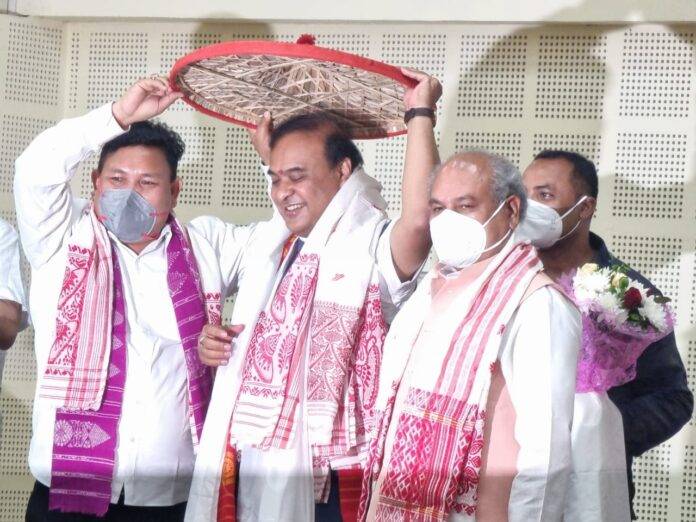 Guwahati | BJP’s chief strategist and senior party leader Himanta Biswa Sarma will be the next Chief Minister of Assam in the northeastern states. The newly-elected MLAs of the party elected him as their leader on Sunday. Himanta will take over as the 15th Chief Minister of Assam on Monday. BJP sources said that Sarma, who has already received the support of two friends of ‘Mitrajot’ – the Asom Gana Parishad (AGP) and the United People’s Party Liberals (UPPL), will meet Governor Jagdish Mukhi at Raj Bhavan and form a new government. Will present its claim for

Sarma, who was instrumental in the BJP’s victory in the recently held assembly elections and the 2016 elections in Assam, will be sworn in as chief minister at a function.

The 52-year-old leader was chosen as the leader of the BJP Legislature Party in a meeting held in the Assam Assembly premises where outgoing Chief Minister Sarbananda Sonowal and four central observers of the party were present.

Soon after being elected leader, Sonowal, Tomar, and other party leaders welcomed Sarma with a traditional Assamese ‘Gamocha’ (a piece of white cloth with a red border, ie Gamcha).

Sarma was an important minister in the Sonowal government, elected from Jalkubari assembly seat for the fifth time since 2001.

The Delhi meeting lasted for more than four hours.

Sonowal belongs to the indigenous Sonowal-Kachari tribe of Assam and come from the Sarma, Assamese Brahmin community. He is the convenor of the anti-Congress North East Democratic Alliance. He led the BJP in the recent three-phase assembly elections held in March-April.

The BJP has returned to power for the second consecutive time by winning 60 seats in the 126-member assembly. While its ally Asom Gana Parishad (AGP) secured nine seats and the new ally United People’s Party Liberal (UPPL) secured six seats.

Memorandum of Understanding (MoU) between CBDT and SEBI signed