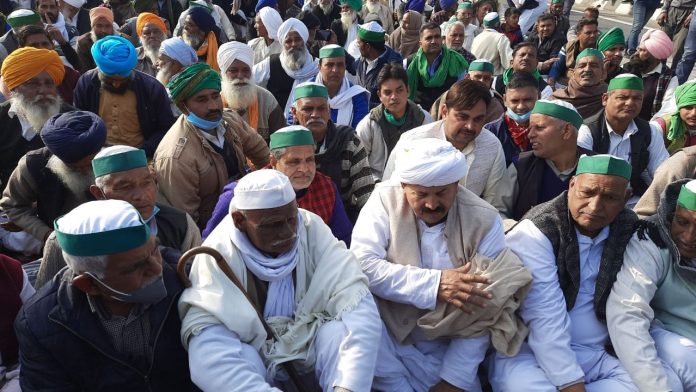 The farmers’ agitation continues on the 23rd day on Friday and a strategy is being chalked out by the protesting farmer organizations to intensify the agitation daily. Meanwhile, the issue of farmers’ movement is in the Supreme Court of the country, so the eyes of the farmer leaders are also on the court proceedings. Although the apex court has not yet given any order to the farmers to remove the sit-in demonstration in the case, the farmer leaders say that if they get any notice from the court, they will take the opinion of the lawyers.

Major Singh Punawal, general secretary of All India Kisan Sabha in Punjab said, “When the farmers get any notice in this regard from the Supreme Court, we will take the opinion of lawyers on it.” Punawal said that this demonstration of farmers is going on peacefully and will go on till the government withdraws all the three laws. He said that the farmers who were martyred during the movement will be paid tribute on 20 December.

Farmers have been camping since 26 November on the borders of Delhi, the country’s capital. They are demanding the withdrawal of three new agricultural laws implemented by the central government in the Corona era. In protest against these laws, the leaders of farmers’ organizations say that their movement will continue till the government does not withdraw all the three laws.

Harinder Singh Lakhowal, general secretary of the Bharatiya Kisan Union (Lakhowal) in Punjab, said that at least one man is coming from every house from Punjab and people from other provinces of the country are also joining his movement, so for a few days Earlier, on the borders of Delhi, where thousands of people were involved in the demonstration, now there are millions of people.

Lakhowal said that like every day today (Friday), there will be a discussion between the leaders of the farmers’ organizations on the outline and strategy of the movement on the Singhu border and a press conference will be organized in the evening. He said that he is also eyeing the hearing on the petitions related to the farmers’ movement in the Supreme Court and on this also there is a consultation among the farmers leaders.

Chief Justice Sharad Arvind Bobde on Thursday heard the Attorney General K.K. K. Asked Venugopal whether you can assure that you will not enforce the law till the matter is heard. However, the apex court made it clear that it is not an opinion to ban the law, but an exercise to explore the possibilities of negotiations between the central government and the farmers union. To this, the Attorney General said that the farmer leaders are adamant and do not want to talk until the government withdraws all the three laws.

Lakhowal said, we want the Supreme Court to ban all the three laws till the issue is resolved through dialogue between the government and the farmer.

Joginder Singh, president of the Bharatiya Kisan Union (Ekta Ugrahan), another Punjab organization, said that about two dozen farmers had died during the agitation against the new agricultural law. He said, we will pay tribute to the farmers who were martyred during the Kisan agitation on December 20. Tribute meetings will be organized across the country.

Joginder Singh also informed that there will be a press conference of the farmer leaders on Friday evening, in which the forward strategy of the movement will be told.

When asked about the hearing in the Supreme Court, he said, so far, the farmers have not received any court notice in this regard. If there is a notice, we will discuss it.

Many deaths due to severe storm in America