Farmers will pay tribute to 20 dead protesters on 20 December 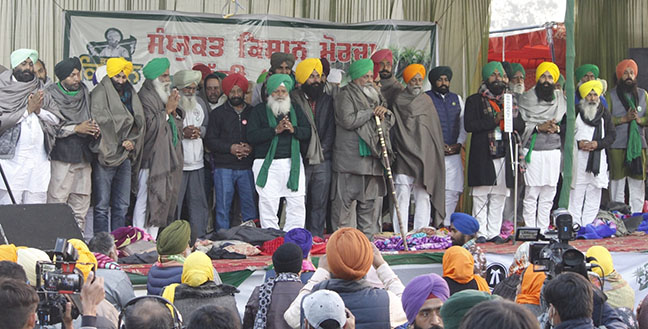 NEW DELHI | Protesting farmers on the Singhu border have announced that they will pay tribute to the 20 farmers who have died since the agitation began on 20 December.

Protesting farmer unions have blamed the Center for these deaths. At the same time, the farmers say that if the government does not withdraw the three agricultural laws, then their movement will continue.

Farmer leader Jagjit Singh Dallewal said, “The Modi government is responsible for these deaths. Even if we have to pay our lives, we will fight to the end and win.”

He said that the tribute will be paid from 11 am to 1 pm.

Rejecting various allegations against a section of protesters, peasant leaders said, “The central government cannot create a rift between us.”

Yudhveer Singh, general secretary of the Bharatiya Kisan Union (BKU) was also present when the farmer leaders were addressing the media. Apart from this, others like Indrajit Singh, Jagjit Singh Dallewala, Rishi Pal Ambavata and Sandeep Gidday, Vice President of Haryana Chapter of Bhakiyoo were also involved.

Accusing the Prime Minister, Yudhveer Singh said, “The Prime Minister was telling industrialists during his FICCI address that the agricultural sector has been opened up to farmers. He is talking ‘Mann Ki Baat’ with the whole world, but we There is no time for farmers. ”

Clarifying the situation once again, Dallewala said that he was not ready to amend the laws, but rather demanded that the controversial agricultural laws be withdrawn. He claimed that this is the reason for the farmers’ agitation that the Center is not calling a winter session of Parliament. “The government says that it will not repeal the laws, but we will force them to do so,” he said.

Delhi will shortly launch an App to consolidate all skill trainees for getting jobs: LG Delhi