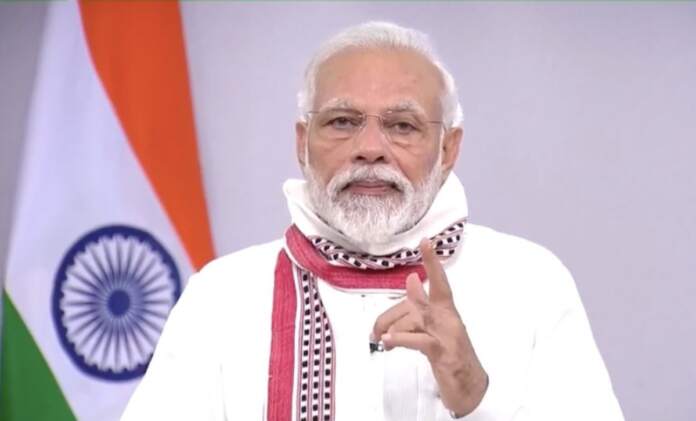 Prime Minister Narendra Modi is constantly talking to the countrymen amidst the ongoing Corona crisis in the country while addressing the countrymen through the Mann Ki Baat program on the radio today (Sunday). This was the 66th edition of PM Modi’s Mann Ki Baat program , PM Modi said, “people are wondering when this year will end?”. There was a lot of talk on the epidemic as well. PM Modi in Man ki Baat mentioned Indian Army soldiers who died in Ladakh while addressing, Modi discussed about Cyclones and Farmers, Unlock 2.0, Locusts.

PM on Indian Army
PM Narendra Modi mentioned the Indian Army soldiers who died in Ladakh from Corona to storm, locust attack while addressing the countrymen. PM Modi said that hundreds of invaders attacked the country, but India came out grand by this. At the same time, without taking the name of China, PM Modi said that those who raised their eyes towards India in Ladakh have received a befitting reply.

PM on Corona and Unlock 2.0
PM Modi said that the country has come out of lockdown during the crisis of Corona. Now we are in the era of unlock. PM Modi said that in this time of unlock, two things have to be focused- Defeat Corona and strengthen the economy and give it strength. The Prime Minister said that we have to be more vigilant during the unlock than lockdown. Always remember that if you do not wear masks and do not follow two yards, you are putting others as well as you at risk.

PM on Aatmanirbharta
No mission can be successful without people’s participation – as a citizen, I seek your resolve, devotion and cooperation in making the country Aatma Nirbhar Bharat.

PM Modi said that India’s resolve is to protect India’s self-respect and sovereignty, India’s goal is self-reliant India and the tradition of India is trust and friendship. The sentiment of India is fraternity, we will keep moving forward with these ideals.

See More: There is no entry into our border, nor is our post in anybody possession: PM Modi

PM Modi said that every effort should be made in this direction so that the strength of the country is increased to protect the borders. The country should become more capable and self-reliant, this will also be a true tribute to our martyrs. If India knows to befriend, then it is also know to look with eyes and give proper answers. PM Modi said that the determination to protect Mother India with which our soldiers have sacrificed, the same resolve is to make every countryman the goal of life.
The entire nation is bowing down and paying tribute to the valor of our brave soldiers who died in Ladakh. Like the families of these companions, every Indian is feeling the pain of losing them. Without naming China, PM Modi said, people used to think that the structure of India will be destroyed, but India has become more grand by these crises.

PM on Cyclones and Farmers
PM Modi said that a few days ago, Cyclone Amphan arrived at the eastern end of the country and Cyclone Nisarg came at the western end. In many states, our farmers are troubled by the attack of the locusts. Small earthquakes are not taking the name of stopping in many parts of the country.

Prime Minister Modi said that even if fifty challenges should come in a year, it does not spoil the whole year. The history of India has been to come out a winner by conquering disasters and challenges.

New Delhi | Delhi needs more vaccines in the fight against Corona. Every day 1 lakh people are being vaccinated in Delhi and the Delhi government now...
Read more
National

India will be peaceful, Chakka Jaam from 11 am to 3 pm