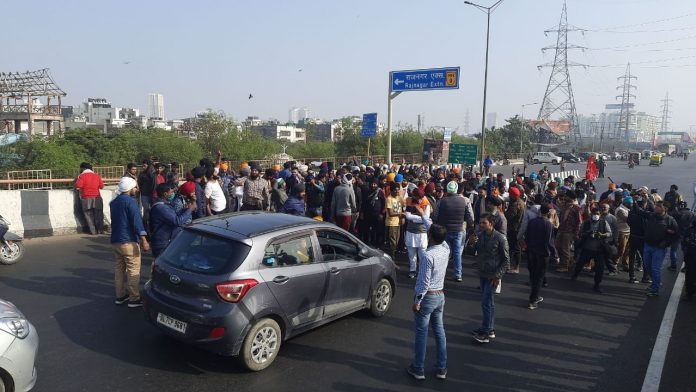 GHAZIPUR BORDER (DELHI / UP) | Farmers are sitting on dharna along the Ghazipur, Tikri and Indus border amidst the agitation against agricultural laws. On the other hand, some protesters sat on a dharna on National Highway 24 at 11.00 am on the Ghazipur border, due to which there was a long jam. But shortly after, the protesters were evicted from the streets. Actually, a group of protesters came out on the streets again, expressing their displeasure against the agricultural law. However, after seeing the anger of the protesters, Rakesh Tikait, leader of the Bharatiya Kisan Union, reached out to them and appealed to them that you all get up from the streets.

The protesters, listening to Rakesh Tikait, told them that the government would have to withdraw this law and you should also sit on the road with us. Seeing the displeasure of the farmers, Tikait sat with them on the road for some time and then got up and appealed to the protesters that now you too get up.

On hearing the appeal of the peasant leaders, the protesters got up from the highway and once again the movement of vehicles started on the National Highway.

However, an interesting picture was seen during this time when the protesters got a pregnant woman out of the jam and gave her way to the hospital. Also, a person who was going to take the Delhi Police examination also got out of this jam.

CANNOT ACCEPT ANYTHING AGAINST THE FARMERS’ INTERESTS: SUKHBIR SINGH BADAL

Superstar Rajinikanth will be honored with Dadasaheb Phalke Award