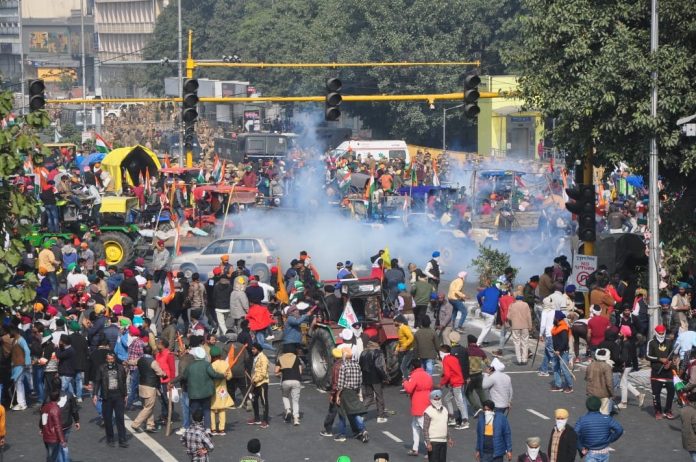 New Delhi | The Supreme Court will on Wednesday hear public interest petitions filed against the violence on Republic Day during the Kisan agitation against three agricultural laws passed by the Center. Justice A. s. Bopanna and V. Ramasubramanian as well as Chief Justice (CJI) S. a. A bench headed by Bobde will hear it.

In one of the petitions filed, the NIA has been asked to direct the inquiry into the matter. It has been said that the NIA should investigate the court surveillance against the anti-social elements who were part of the tractor rally, who were involved in violence on the streets of the national capital on Republic Day.

The petition, filed through advocates Shashank Shekhar Jha and Manju Jaitley Sharma, said that the attack on the Red Fort and the National Flag on Republic Day required immediate attention. The petition states that the protesters cannot be allowed to commit violence in the name of protest. In the plea, it has been said that along with expressing freedom and protest, the rights of others should also be considered.

The petition also sought directions for the formation of a judicial commission headed by a retired Supreme Court judge or a special investigation team, which is said to be monitored by the apex court.

Apart from this, a petition has been filed by advocate Vishal Tiwari, urging the apex court to issue directions to file an FIR against the persons or organization responsible for insulting the national flag.

The petition states that unfortunately, the tractor rally took a violent turn, causing damage to public property as well as injury to people. “The incident has also affected the daily routine of the public. Internet services have been disrupted as the government ordered the operators to suspend it,” the petition said.

Apart from this, a Mumbai law student has also written a letter to Chief Justice of India Bobde to take suo motu cognizance of the incident in the Red Fort. So far, around five arguments have been filed in the apex court for action against those involved in the violence on Republic Day.

Significantly, thousands of farmers took out a tractor rally on Republic Day demanding the withdrawal of the three new agricultural laws of the Center, but in a short time, chaos spread in the streets of Delhi. Protesters broke down police barricades at many places. He clashed with the police in many places. Those involved in the demonstration vandalized vehicles and also unfurled a religious flag at the Red Fort.