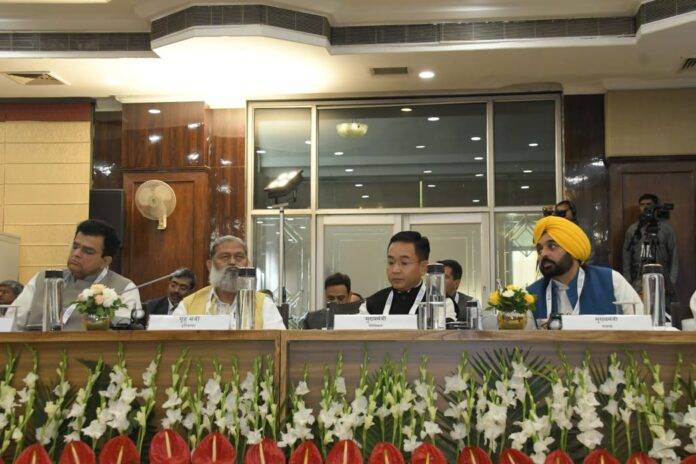 Union Home and Cooperation Minister, Shri Amit Shah addressed the first day of a two-day ‘Chintan Shivir’ at Surajkund, Haryana today. Chief Ministers of the States, Home Ministers of States and Lieutenant Governors and Administrators of Union Territories are participating in the Chintan Shivir. 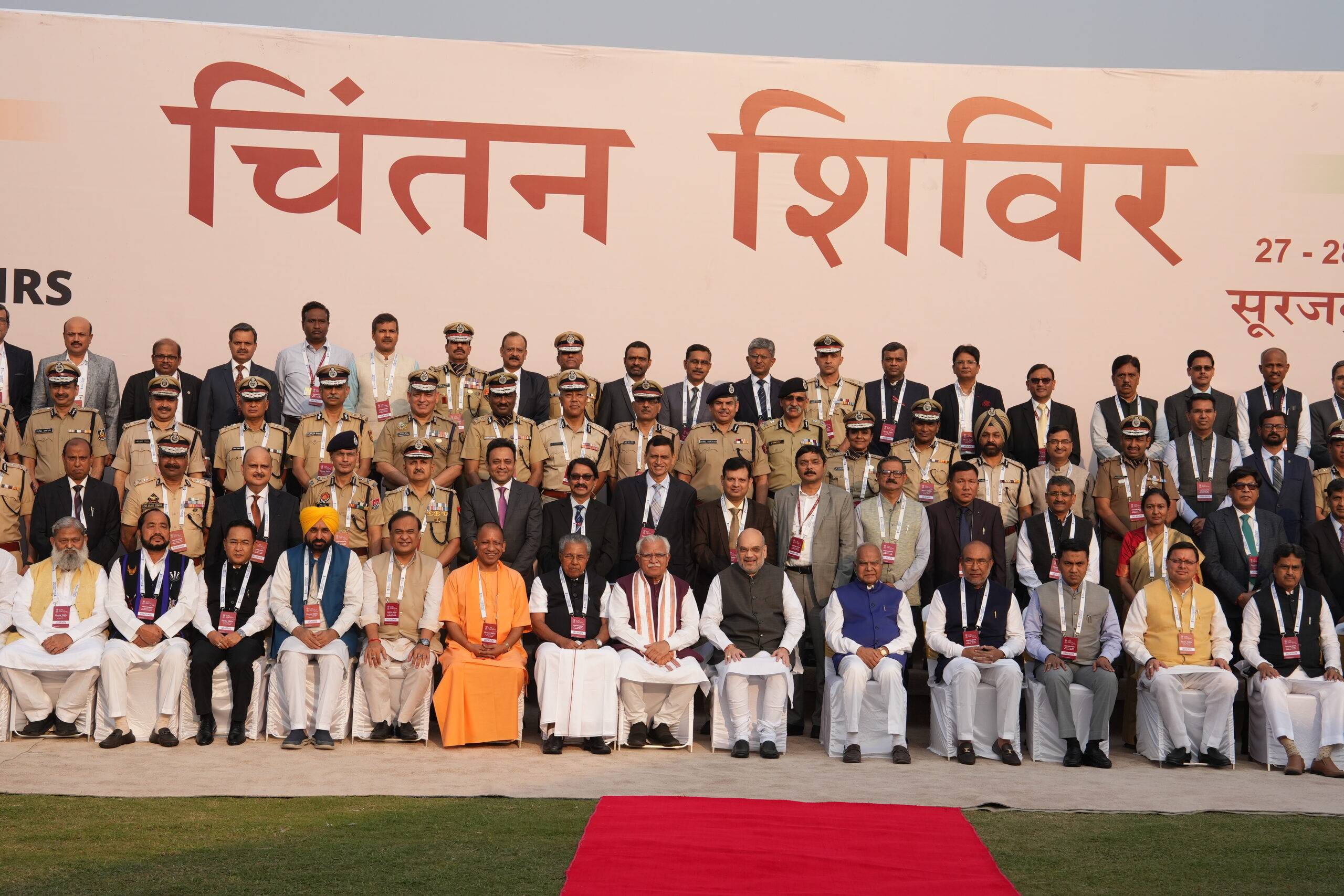 In his address, Shri Amit Shah said, taking inspiration from Prime Minister Narendra Modi, this Chintan Shivir, is being organized which will provide a common platform to face challenges before the Nation such as cyber-crime, spread of narcotics and cross-border terrorism in unison.  He said today the nature of crimes is changing and they are becoming borderless, that is why all States will have to battle these by having a common strategy. To formulate and implement this common strategy, the Government led by Prime Minister Narendra Modi, under the spirit of ‘Cooperative Federalism’, ‘Whole of Government’ and ‘Team India’ approach is promoting the 3C’s, that is Cooperation, Coordination, Collaboration between the Centre and the States. 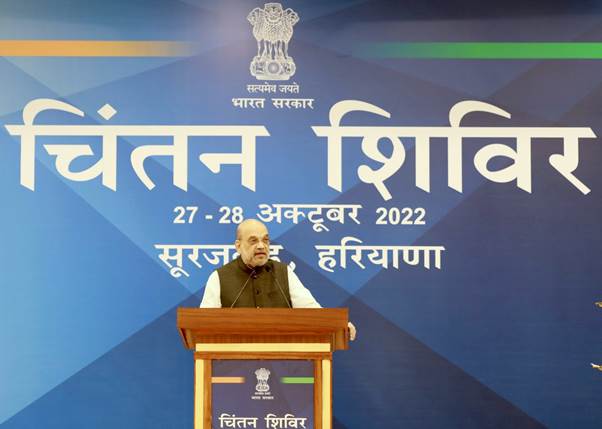 The Union Home Minister said that the areas affected by Left Wing Extremism, Jammu and Kashmir and the North Eeast, which were once hot spots of violence and unrest, are now becoming hot spots of development. He said the security situation in the North East has improved significantly in the last eight years and since 2014 there has been a 74 percent reduction in insurgency incidents, 60 percent in casualties amongst security forces and about 90 percent in civilian casualties. Apart from this, efforts have been made to establish lasting peace in the region by signing of agreements with the NLFT, Bodo, Bru, Karbi Anglong under which more than 9,000 militants have surrendered. He said with the restoration of peace in the North East, AFSPA has been withdrawn from more than 60 percent areas. Highlighting the improvement in the situation in the LWE affected areas, Shri Shah said the incidents of violence in these areas have come down by 77 percent and deaths in these incidents have reduced by more than 85 percent. Shri Shah said after the abrogation of Article 370 in Jammu and Kashmir on August 5, 2019, a new beginning of peace and progress has begun there. He said compared to 37 months before August 5, 2019, there has been a 34 percent reduction in terrorist incidents and 54 percent reduction in deaths amongst security forces in the 37 months after August 5, 2019. He said that the government under the leadership of Prime Minister Narendra Modi has followed a zero tolerance policy against terrorism and the NIA and other agencies are being strengthened to achieve a decisive victory over it. Shri Shah informed that before 2024, efforts are being made to set up an anti-terror network by setting up NIA branch in all the states. Shri Shah said that to achieve a decisive victory in the fight against terrorism, the legal framework is being strengthened, under which provision has been made to declare individual terrorists by amending the NIA and UAPA laws. He said that the NIA has been given extra territorial jurisdiction and along with this the agency has also been given the right to confiscate the property acquired / related to terrorism. Shri Shah said that by 2024, a target has been set to establish branches of NIA in all the states of the country. He said that today most of the security hotspots in the country have become almost free from anti-national activities due to mutual cooperation and coordination between the Centre and the states. Shri Shah said the zero tolerance policy of the Government of India against narcotics is yielding good results and in the last 8 years, 3,000 cases have been registered while drugs worth more than Rs. 20,0000 crore have been seized. 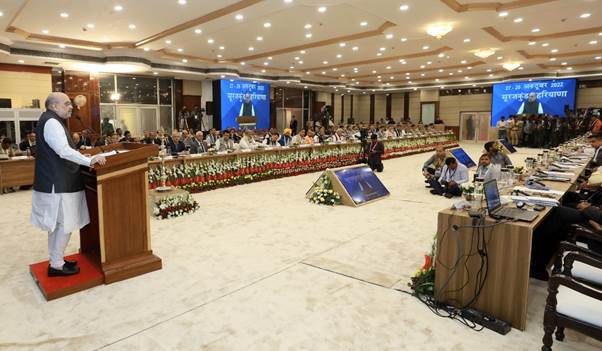 Shri Amit Shah said cyber-crime is a big threat before the Nation and the world today and the Ministry of Home Affairs is ready to fight against it. He said that the Ministry of Home Affairs is continuously working on reforms in CRPC, IPC and FCRA and soon their revised blueprint will be tabled in Parliament. Shri Shah said the States should make maximum use of forensic science to increase the conviction rate and the Central Government has provided all possible help by forming the NFSU. He also emphasized that border States will have to make more coordinated efforts with Central agencies and security forces to ensure border security and coastal security. Shri Shah said the Government led by Prime Minister Narendra Modi has also taken several initiatives in disaster management and requested all Chief Ministers to personally monitor the implementation of these initiatives.

The Union Home Minister said there is a need to make proper use of all resources of internal security available to fight challenges before the Nation. He said for this there has to be resource optimization, rational utilization of resources and integration of resources, which would further improve coordination between the States. Shri Shah said the Government is working on the principle of “one data, one entry” and under this, NIA has been given a national database related to terrorist cases, NCB has a national database related to narcotics cases, ED has a database related to economic offences and NCRB has been given the responsibility of creating a fingerprint database – NAFIS and National Database of Sex Offenders (NDSO). He said under regulatory reforms, I4C i.e. Indian Cyber ​​Crime Coordination Centre has been formed, Cyber ​​Crime Portal has been created, a system to connect NatGrid has been set up, Private Security Agency Licensing Portal has been created and reforms have been done in the FCRA.  Shri Shah said under the FCRA reforms  action against some organizations involved in anti-national activities, conversion, political opposition to development projects or propaganda against policies of the Government have been initiated and under the amendment made  in 2020 to prevent the misuse of foreign funding, effective monitoring has become possible. 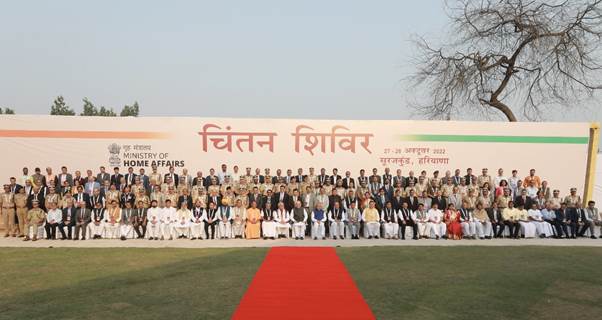 Shri Amit Shah said the Government led by Prime Minister Narendra Modi is working on three major challenges in a time bound strategy. First, complete planning for health services. Under which the Ayushman CAPF scheme was started and about 35 lakh health cards have been distributed and about Rs. 20 crore have been disbursed. Second, increasing the housing satisfaction ratio. The level of residential satisfaction was around 37 per cent in 2014, which has increased to 48 per cent at present. Apart from this, with the creation of CAPFs e-Awas web portal, a target has been set to increase this level to 60 percent. Third, the Age of Policing, under which there is a provision of 100 days leave, raising the retirement age from 57 to 60 years and recruitment of 64,640 candidates. He said that we have to move from the regional approach towards a thematic approach in policing.

The Union Home Minister said internal security is very important for development, stability and good governance of the Nation and it is a common responsibility of all of us. He said the Centre and the States have equal responsibility in Nation building. A country can progress only when there is close cooperation between all agencies. Shri Shah said the spirit of cooperative federalism should be our driving force during the Amrit Kal and expressed confidence that this Chintan Shivir will further expand regional cooperation.

Facebook
Twitter
Pinterest
WhatsApp
Previous articleAfter handing over the post of President to Kharge, Sonia said, now I am feeling relieved
Next articleHere’s why Boney Kapoor’s Mili is the most challenging role yet for Janhvi Kapoor
Team Janmat Samachar

This time board examination will not start in February: Education Minister Nishank