Whose weight in Rajasthan assembly by-election? 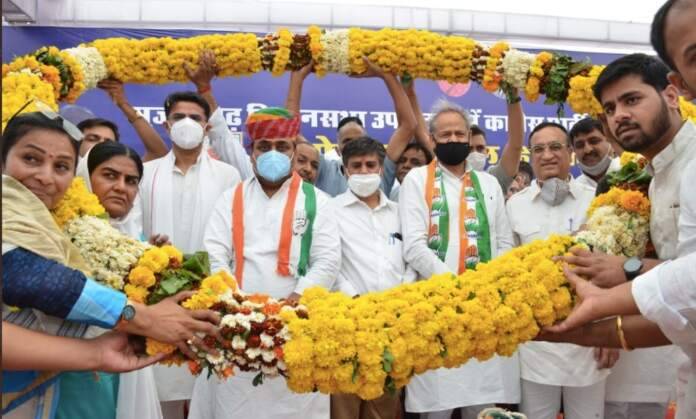 Jaipur: The by-election on April 17 in the three assembly seats of Rajasthan is being seen as a semi-final in the 2023 assembly election to be held after two years. The results of these are considered to be the report cards of the functioning of the ruling Congress government.

After the result, it will be proved that despite all the divisions, the real face of the Congress trying to show itself as ‘united’ will be revealed, on the other hand, its result will also be a reality check of the divided opposition. The three seats where the by-elections are to be held are Shahada, Sujangarh, and Rajsamand.

Congress sources have confirmed these reports that Sachin Pilot has been accommodated at Gehlot Camp. The benefit of this is likely to get in the by-elections as two out of these three seats have the influence of the Gurjar community. BJP sources confirmed that former CM Vasundhara Raje has deliberately kept away from election campaigns.

However, on behalf of the BJP, Rajasthan in-charge Arun Singh has asked all the senior leaders how they are contributing to the party.

The reality of being united by the Congress was revealed when the picture of Sachin Pilot was put on the stage on the last occasion in Sujangarh on Tuesday.

However, there are still many questions that have not been resolved. For example, in Rajasthan last year, after the political crisis that was created in July last year, all the ministers of the pilot camp were snatched by the High Command, they have not got their old department in the Gehlot government.

However, in July last year, instructions were made to return the MLAs of the pilot camp to the ministry. Despite this, the pilot camp remains silent.

Vasundhara Raje’s supporters, on the other hand, are outspoken. These days a group named Team Vasundhara Raje 2023 is active on social media. On its behalf, questions are being raised as to why the pictures of Vasundhara Raje are missing from all the posters in these elections. However, BJP leaders claim that there is a protocol for the poster.

He says that pictures of the PM and the party president are placed everywhere, followed by posters of the CM / State President / Leader of the Opposition. In such a situation, there should be no politics on this issue